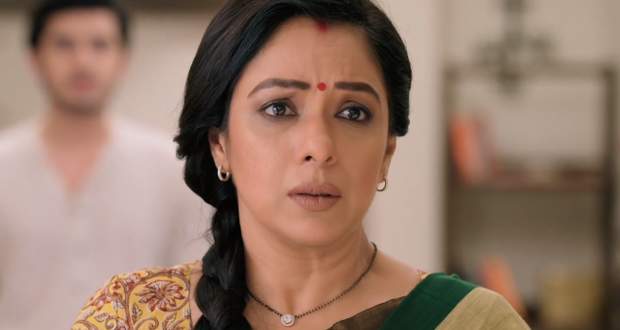 Today's Anupama 20 Aug episode starts with Samar accusing Toshi of being rude to their mother. He is angry at his brother for treating their mother like a doormat.

Samar wants Paritosh to apologize while later they both start fighting. Pakhi stops their fight while Anupama is shattered with the accusations put on her.

Samar consoles his mother while Anupama feels guilty for making mistakes. Meanwhile, Vanraj is thinking about his plan of making Kavya feel jealous and feels unlucky to have married Anupama.

Anupama feels Vanraj and Paritosh’s behavior is justified. Elsewhere, Rakhi is worried about her daughter and doesn’t want her to be treated the same way as Anupama is treated.

In the morning, Vanraj asks Samar about Paritosh and later asks Paritosh to give his phone. He sees Kinjal’s name in the call history and throws his phone on the floor.

Vanraj leaves in anger while Baa blames Anupama for the differences between father and son. Anupama decides to make things right while Baa stops her.

Elsewhere, Vanraj is in his thoughts when Kavya enters his office and starts questioning about his weird behavior. She is upset that Vanraj didn’t give her any attention and was doing Rasleela with Anupama.

Vanraj doesn’t want to fight with Kavya and let Anupama and Anirudh interfere in their love relationship. Kavya asks about Paritosh while Vanraj is still upset with Rakhi’s behavior and doesn’t even want to see her face. Anupama reaches Rakhi’s house to talk while Rakhi opens the door.

Upcoming Anupama episode update: Anupama apologizes to Rakhi while Rakhi puts a condition in front of her.