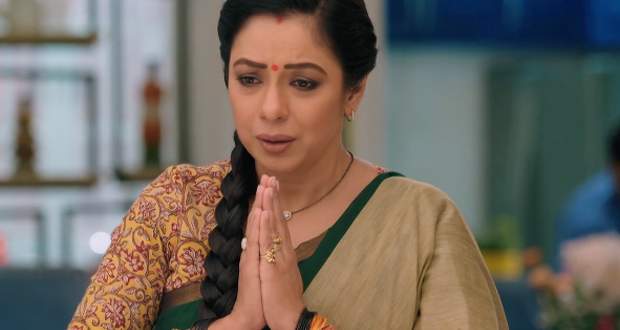 Today's Anupama 21 Aug episode starts with Anupama greeting Rakhi with respect and wishing to talk as a mother. Rakhi doesn’t have time and at the end agrees to have a conversation.

Samar finds a packet of cigarettes in Pakhi’s bag and is adamant to tell their mother about it. Meanwhile, Rakhi brags about her servants while Anupama wants a chance to talk.

Anupama explains they need to focus on their kid’s happiness and that she wanted to get her daughter, as well as daughter-in-law, educated. She promises that she will never let the housework come in way of Kinjal’s success.

Anupama apologizes to Rakhi while Rakhi is ready to move forward with the relationship but on one condition. Elsewhere, Kinjal tells Paritosh that Anupama came to her house.

Paritosh talks against his mother while Kinjal takes Anupama’s side. Kinjal wishes to talk to her father but can’t go against her parents. Kinjal tells Paritosh about her mother’s condition.

Pramod is upset with Rakhi’s condition while Rakhi is sure her decision is right. Meanwhile, Samar tries to cheer up Baa and later find Paritosh having a panic attack.

Anupama and Vanraj come home and find Paritosh in a terrible condition. Vanraj mocks Paritosh for being weak like his mother and is angry with his behavior.

Upcoming Anupama episode update: Paritosh gets upset with Vanraj and leaves the house.