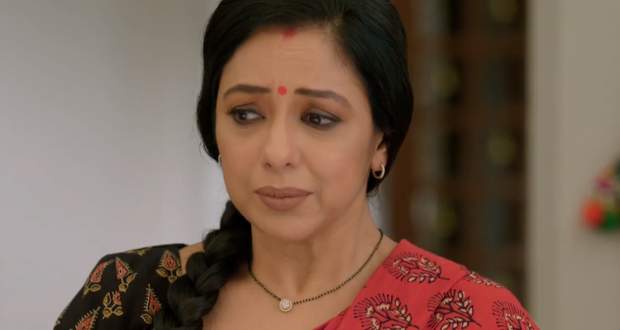 Today's Anupama 22 Jul episode starts with Vanraj showing his annoyance with Anupama. He says he is fed up with daily problems and might just leave coming back home.

In the morning, Jhillmill gets shocked to see the trophy in the garbage. Mamaji comes home at the same time and takes the trophy from Jhilmil.

Samar knows Toshi has a girlfriend and taunts him for not supporting their mother. Later, Mamaji pulls his sister’s leg while Leela praises Anupama for making Dahi Bada.

Anupama asks Leela if she can invite her family and convinces her. Vanraj and kids also greet Mamaji while later they all have breakfast together. Vanraj praises the Dhokla made by Anupama while Samar again talks about the stall.

Vanraj taunts him for not focusing on his career and arguing unnecessarily. Vanraj gets a call from Pakhi’s principal stating they want to offer a job to Anupama.

They want Anupama to teach cooking to school kids for their SUPW classes. Pakhi asks Anupama to not take the job while Samar and Mamaji support her.

Vanraj asks Anupama if she can manage while Anupama remembers his harsh words. She says no for the job and continues with the work. Later, Kavya offers to have a date in the office with Vanraj.

Anupama’s mother and brother come to visit and Leela taunts them. Meanwhile, Kavya gets upset with Vanraj for being a typical man and not supporting his wife.

© Copyright tellybest.com, 2018, 2019, 2020. All Rights Reserved. Unauthorized use and/or duplication of this material without written permission from tellybest.com is strictly prohibited.
Cached Saved on: Wednesday 28th of October 2020 12:19:53 AM