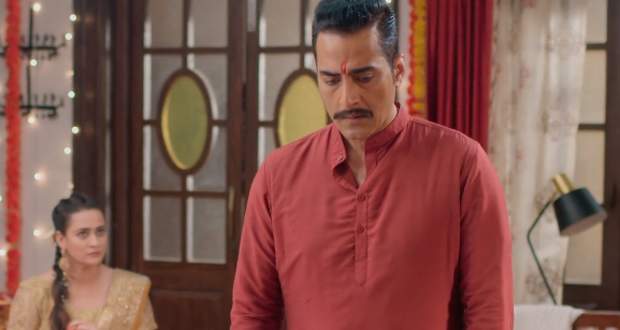 Today's Anupama 22 Oct episode starts with Vanraj trying to wake up Anupama while Kavya is scared. Vanraj further asks Kavya to leave in anger and Kavya runs away.

Baa wonders where Anupama went while Devika rushes to their room. Kavya is scared about Anupama’s state and that she might reveal the truth.

Devika bumps into Kavya and gets confused about her state. Kavya tries to sneak out of the house and bumps into Rakhi. Rakhi knows something has happened between her and Vanraj and is happy that she found the reason to break Paritosh and Kinjal’s marriage.

Devika shouts and calls everyone in the room as she witnesses Anupama in an unconscious state. Baa asks Vanraj about her state while he stays silent. Sanjay and Nandini get an idea about what might have happened.

Samar blames Vanraj for shouting at Anupama while Baa thinks she might have gotten tired. Samar and Devika think something else has happened while Vanraj doesn’t have an answer.

Vanraj lies that he found Anupama unconscious in the room and that he hasn’t done anything. The doctor comes and says Anupama might have learned some shocking news and her BP went up.

The doctor says they need to monitor her for 24 hours. Samar wishes to stay with his mother while everyone consoles him and leaves the room except Devika. Devika finds Kavya’s earring and is sure something is related to her.

Baa is upset while Kinjal also decides to stay with the family. Elsewhere, Anupama repeats why in her unconscious state while Devika tries to wake her up.

© Copyright tellybest.com, 2018, 2019, 2020. All Rights Reserved. Unauthorized use and/or duplication of this material without written permission from tellybest.com is strictly prohibited.
Cached Saved on: Monday 30th of November 2020 04:00:32 PM