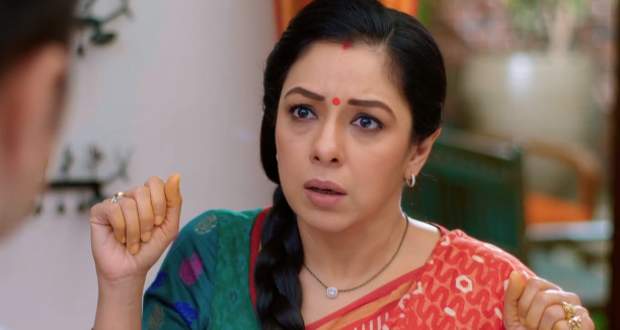 Today's Anupama 22 Sep episode starts with Kavya getting scared of Anirudh’s threats. Vanraj fumes in anger and enters his room. He receives various edited photographs of him and Kavya by Anirudh.

He gets angrier while Anupama comes and talks about wedding preparations. She further wishes to dance with him as they did on Janmashtami. Anupama hugs him from behind while Vanraj gets furious with her.

He is angry at her for touching him with hands covered in spices. Anupama gets really upset and goes into the washroom to scrub her hands properly.

Sanjay witnesses Anupama’s worried state and asks Vanraj to make things right or he will reveal the truth. Vanraj gets scared and is forced to apologize to Anupama.

He says he loves the smell of her food as well as her hands. He hugs Anupama and at the same time, Kavya arrives there. Anupama takes Kavya and Vanraj downstairs for a ritual.

Baa continues to stay near the ring to look after it. Also, Baa’s relative, Kamini comes at Shah house and Baa gets extremely excited. She greets everyone and then gets shocked to see the 5 lakh worth ring.

Vanraj calls Promod to invite for the Godhdhana ritual at their house. Rakhi picks up the phone and calls him Sasurji while Vanraj invites her and the family for the ritual and lunch.