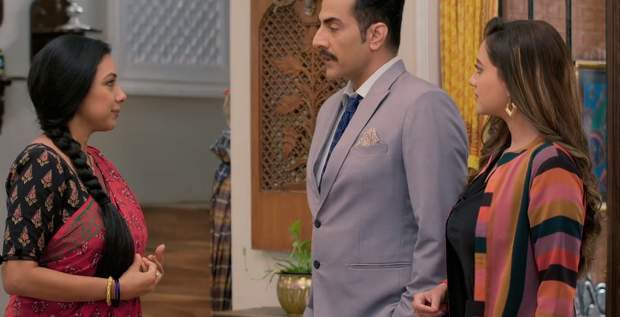 Today's Anupama 23 Jul episode starts with Leela refusing to eat the Ladoos made by Anupama’s mother. Meanwhile, Samar is upset with his father’s words and dances to release frustration.

Vanraj asks Kavya to come home with him and eat delicacies made by Anupama. Meanwhile, Leela continues to insult Anupama’s family while Anupama learns her mother is in pain.

Her family is not able to spend 50 thousand rupees for the operation. Anupama gets worried about her mother and thinks about the job offer.

Later, Vanraj returns home with Kavya and he reveals that Kavya has cracked a deal. Anupama says she will make her favorite food while Kavya asks her to accept the job offer.

Kavya gets a yes from Vanraj as well and convinces Anupama to say yes as well. Anupama thinks for a moment and says yes for the job. Later, Anupama calls the principal and accepts the offer.

The principal asks Anupama to make an email id so that they can send the appointment letter and salary details. Anupama gets really excited and starts dancing.

Meanwhile, Vanraj is upset with Kavya for becoming Anupama’s best friend. Kavya is not ready to be a puppet for Vanraj. Vanraj gets jealous when her ex-husband calls her.

Devika gets happy to learn that Anupama has got a job. Leela tells Dolly about Anupama’s job while Dolly’s daughter gives a pen to Anupama. Samar gives Anupama her offer letter and she signs it with Bapuji’s blessings.

Upcoming Anupama episode update: Anupama thanks Vanraj while he warns her of not forgetting about the family.

© Copyright tellybest.com, 2018 & 2019. All Rights Reserved. Unauthorized use and/or duplication of this material without written permission from tellybest.com is strictly prohibited.
Cached Saved on: Wednesday 5th of August 2020 02:10:21 AMCached Disp on: Friday 7th of August 2020 12:19:54 AM