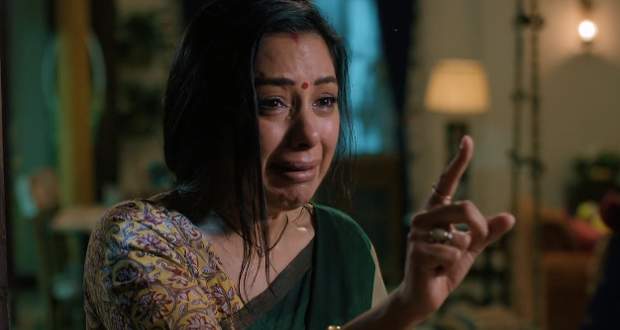 Samar asks Anupama and Vanraj to sleep as Paritosh is safe. Paritosh is standing outside Shah House wondering if the family is waiting for him. Samar switches off the light while Paritosh leaves but a light flashes on his face.

Later, Samar bangs Anupama and Vanraj’s room door and says police have arrived. The police reveal that they have found a wallet and ID card of Paritosh on a dead body.

Anupama wakes up in shock and it all turns out to be a nightmare. She gets really scared and prays to God to never make her see such a horrifying dream.

Anupama stays near the door and waits for Paritosh. She goes to Samar’s room and reveals her dream. Samar says he will call his friend and calls Kinjal instead.

Kinjal sends a photograph of Paritosh sleeping and Anupama is relieved. In the morning, everybody in the family prays while Anupama wants her son back in the house.

Later, Anupama asks Baa how she can bring her son back. She is ready to perform any ritual while Baa recites a story of Krishna and Naarad Ji. She asks her to believe in god as it is the biggest strength for a mother.

She decides to make food for Paritosh while later she finds Samar and Pakhi arguing about the cigarette packet.