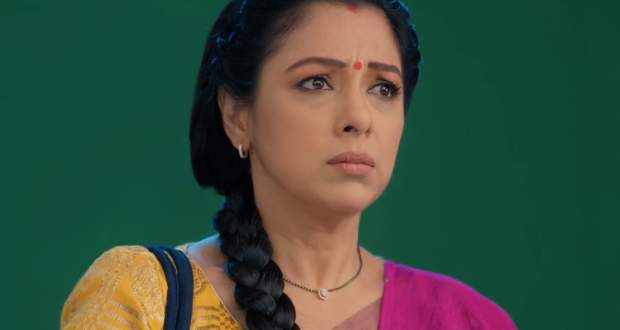 Today's Anupama 25 Jul episode starts with Samar asking Kavya if she has any problem. Kavya says she doesn’t have any problem while Vanraj asks Anupama to get ready fast.

Anupama gets ready and takes blessings from the elders and god. Anupama and Kavya go for the front seat door but Anupama asks Kavya to sit in front.

Kavya asks Anupama to keep working and earn respect so that she can stand on her feet even when alone. Vanraj is not happy with her advice for Anupama while Anupama asks her to get married again.

Vanraj asks Anupama to take auto as he has to go back home and get a file. Anupama is unable to get an auto and gets late for school. Meanwhile, Kavya is insecure about Anupama and Vanraj’s relationship.

The principal gets mad at Anupama for being late while Pakhi’s friends make fun of her. She further tells her that the class she is going to teach is really notorious.

She enters the class and finds students playing and fighting with each other. She tries to talk but no one listens to her. She decides to play their game and shouts hands up.

The kids refuse to learn from Anupama. Meanwhile, Meenu asks Leela to make a burger for her. Later, Anupama sings a song and dances to make the kids make a burger. The principal gets impressed by Anupama’s style of teaching.

Upcoming Anupama episode update: Anupama gets her first salary while Leela asks her to not go to work.