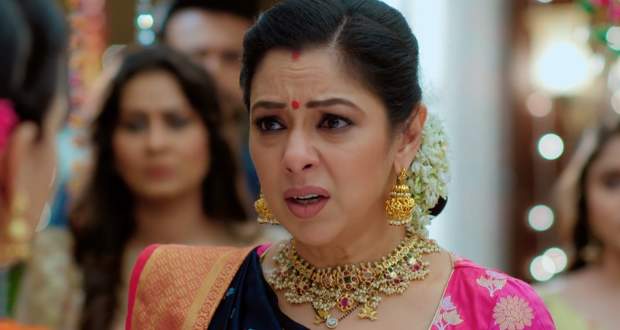 Today's Anupama 25 Sep episode starts with Pramod wishing to leave while Rakhi offers to buy the new ring. Kinjal and her family leave while Paritosh suggests calling the police.

Kamini gets worried and accuses Jhilmil of being an outsider and a probable thief. Anupama comes at the same time and doesn’t want Kamini to utter a single word against Jhilmil.

She states that it is easy to get suspicious but tough to trust someone. She further states that she will never give a second chance to the one who breaks her trust.

Vanraj and Kavya get scared of Anupama’s declaration. Baa taunts Anupama for spoiling the function and leaves. Later, Vanraj asks Anupama if she found the ring while Kavya thinks Kamini might be right.

Anupama compares Kavya with Jhilmil and leaves while Kavya is raged to get compared with a maid. Vanraj doesn’t want Kavya to overreact while Kavya is hurt by his words.

Baa questions when Kavya will leave while Anupama wants her to stay till engagement. Baa further curses the thief of the ring while Kamini gets scared of the curses.

Kavya sits near Vanraj and even offers to serve food. However, Anupama knows how Vanraj likes his Theplas while Baa asks Kavya to behave like a guest.

Later, Samar comes running and reveals he has found the ring. The family gets happy while the box is still empty and Samar and Anupama are doing a drama to catch the thief.

Kamini rushes towards her room to check the ring and finds it in her bag. She is confused about Samar’s declaration and at the same time, Anupama catches her red-handed. Kamini asks for forgiveness while Anupama is not happy with her fraud.

Upcoming Anupama episode update: Vanraj and Samar get in a fight while Anupama asks Kavya to not talk between them.