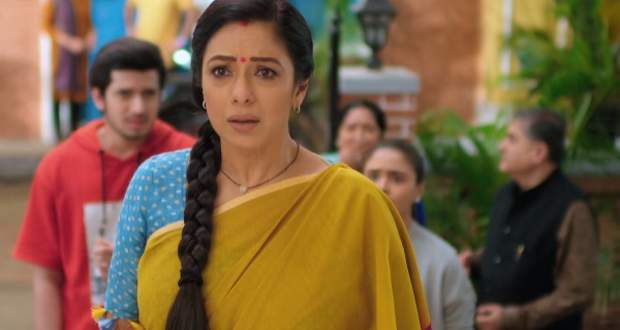 Today's Anupama 26 Aug episode starts with Anupama asking Samar to leave the room. She asks Pakhi if the packet belongs to her while Pakhi says someone has performed a prank on her.

Anupama asks Pakhi to not lie to her ever and that she trusts her. Later, Anupama consoles Vanraj while at the same time someone comes at their doorstep and blazes horn continuously.

They find Rakhi outside their house who reveals that Paritosh is staying at her house. She reveals that she has put another condition in front of him and he has agreed to it.

She has asked Paritosh to become their Ghar Jamai if he wants to marry Kinjal. Rakhi leaves while Vanraj fumes in anger. He declares that they don’t have any relationship with Paritosh and decide to break all ties.

Kinjal’s father asks Paritosh to think again about his decision as no one stays happy leaving their family. Rakhi overhears this and gets angry with him.

Baa asks Anupama to bring Paritosh back while Anupama assures her she will bring him back. Meanwhile, Vanraj and Kavya get into an argument while Kavya leaves without him.

Later, Anupama arrives at Rakhi’s house and asks Paritosh to come home along with her. Rakhi stops her while Anupama asks Rakhi to not come in between her and her son.