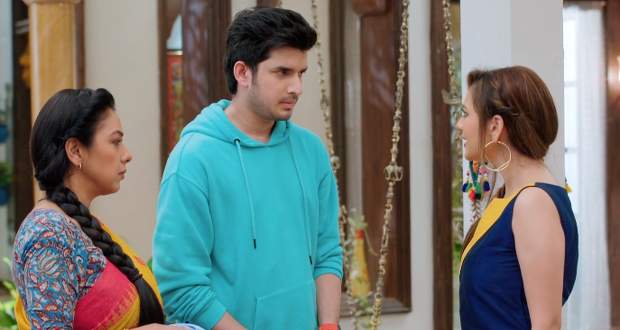 Today's Anupama 26 Sep episode starts with Baa asking Samar to show the ring while Samar hides the empty box. Meanwhile, Kavya sends love messages to Vanraj and he sends hearts to her back.

Anupama asks Kamini to apologize to Jhilmil for accusing her. Later, Anupama comes near Samar and puts the ring back in the box. She further hands over the box to Baa and she takes the responsibility to take care of the ring.

Further, Samar goes to Nandini’s house for a treat while ends up making her French fries delicious. Nandini is impressed while Samar is ready to visit her house every day.

Vanraj has to do an urgent meeting on a video call while Kavya suggests doing it in the room. Anupama suggests they should do it in the hall as the elders of the family might not like it.

Later, Samar shouts in the house while Kavya rebukes him. Samar apologizes but Kavya continues to scold him for shouting unnecessarily. Anupama asks Kavya to not scold him as she can handle her son.

Kavya rebukes Samar and Vanraj for fighting while Anupama stops her. She states that Kavya or any other person doesn’t have the right to speak in between a father and a son. Vanraj also agrees with Anupama.

Anupama consoles Kavya and explains to her how she knows Vanraj better than her. Later, Kavya learns that Vanraj likes laundry done by Anupama only. Anupama wishes to make Shervani for Paritosh using her Saree.