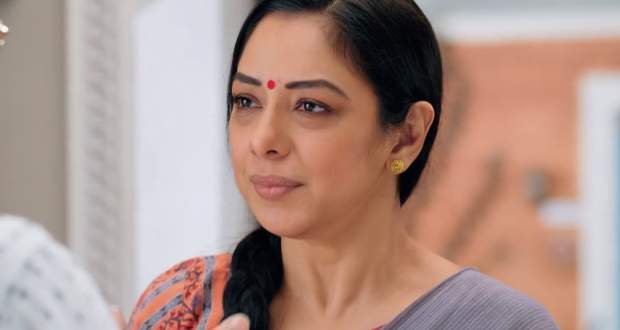 Today's Anupama 27 Oct episode starts with Anupama sharing her pain with Devika. She states that her life is all dark and she is left all alone in the world.

She decides to make her life better using the same hands that are left empty. She states that she will remember no woman is weak.

Devika writes ‘I’m enough’ on Anupama’s hand and reminds her of her identity. Anupama gets up and shouts her own name instead of anyone else’s.

She takes blessings from the goddess for starting a new life living by her own rules. Later, Anupama returns home and enters the kitchen.

Bapuji gets relieved to see Anupama in her normal state. He asks Anupama about her state while she doesn’t tell him the truth.

Anupama gives medicines to Bapuji while Bapuji wants her to take a rest in the garden area while he brings something to eat.

Anupama doesn’t want to punish her other relations because of the betrayal of one relationship. She comes outside and sees Kavya while Kavya gets scared to see her and rushes inside.

Bapuji brings tea for her while Jhilmil and Baa get relieved to see Anupama well. Pakhi and Paritosh also come to hug Anupama while Samar gets emotional.

The family spends an emotional moment with Anupama while she wishes to meet Vanraj. Pakhi and Paritosh offer to take her to the room.

© Copyright tellybest.com, 2018, 2019, 2020. All Rights Reserved. Unauthorized use and/or duplication of this material without written permission from tellybest.com is strictly prohibited.
Cached Saved on: Tuesday 24th of November 2020 11:56:38 PM