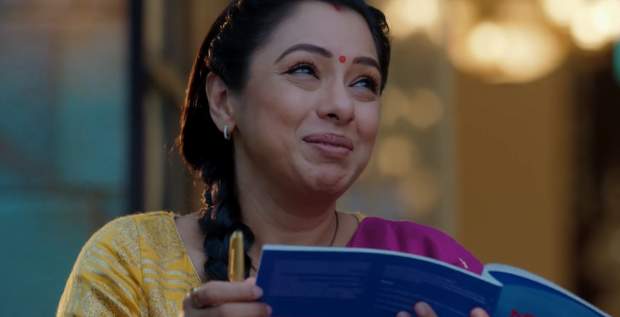 Samar promises her mother that he will tell his mother about his girlfriend before anyone else. Anupama wants to be friends with her kids as well as their girlfriends.

Toshi asks Vanraj to bring Kavya to create a good image. Vanraj refuses her proposal while Toshi gets upset with him. Later, Anupama finds movie tickets in Vanraj’s bag while he lies to her.

Anupama receives a call from the principal who asks her to come to school by 11 am as it’s inspection day in their school. Anupama gets worried and at the same time, Meenu comes with Sanjay.

Sanjay asks Anupama about her problem and she tells him the truth. He offers to stay with Meenu for a while until the time she comes back. Anupama asks Vanraj but he doesn’t hear her as he is on phone.

Anupama completes her work on time to be on time for the inspection. Meanwhile, Vanraj gets upset as Kavya is going with the wrong man. Kavya says she can take care of herself and wants him to trust her.

Vanraj comes back home and asks Anupama to make traditional Gujarati food for some foreign clients.

Upcoming Anupama episode update: Anupama decides to take care of her as well as Vanraj’s job.