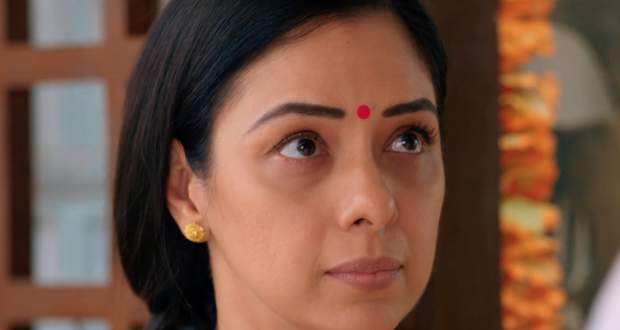 Today's Anupama 29 Oct episode starts with Vanraj asking Kavya to not call him again and again. Kavya asks Vanraj to come to meet her while Vanraj is upset with her.

Kavya asks if Vanraj will leave her while Vanraj gets irritated and disconnects the call. Meanwhile, Anupama talks to Devika and reveals she is not going to get trapped in Vanraj’s lies.

Devika asks her about her plan while Pakhi enters the room. Anupama asks Pakhi if she can stay with her and also says she will learn to live away from Vanraj.

Pakhi confronts Vanraj about the same and recites her conversation in front of Baa and Bapuji. Baa and Bapuji are not convinced of Vanraj’s excuses.

Nandini meets Samar and realizes Anupama has not told anyone. Meanwhile, Anupama confronts Paritosh about hiding the truth from her.

Paritosh says Vanraj is changed while Anupama calls him just like her. Anupama is further left in shock to learn that Sanjay and Nandini also know the truth.

Paritosh wants Anupama to start a new beginning with Vanraj while Anupama wants to take her own decision.

Kinjal meets Anupama outside the room and wonders why she is so upset. Later, Baa wants Anupama to wear the Magalsutra and asks Vanraj to tie it.

Anupama stops Vanraj and doesn’t wear the new Mangalsutra. She wears the old one on her own while Vanraj mocks her about taking her own decisions.

Anupama makes it clear that wearing a Mangalsutra is also her decision as she doesn’t want to punish other family members.

© Copyright tellybest.com, 2018, 2019, 2020. All Rights Reserved. Unauthorized use and/or duplication of this material without written permission from tellybest.com is strictly prohibited.
Cached Saved on: Thursday 26th of November 2020 09:26:17 AM