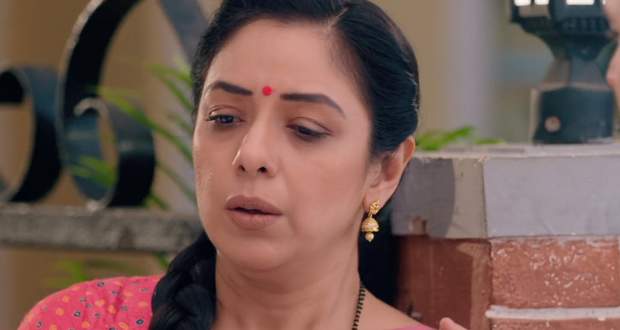 Today's Anupama 2 Nov episode starts with Vanraj coming to meet Kavya. Kavya gets really happy to see him and asks if Anupama has told anyone.

Vanraj reveals she hasn’t told anyone but is not the same Anupama he used to live with. Meanwhile, Baa wants to know what’s wrong between Anupama and Vanraj.

Baa asks Anupama to treat Vanraj well as he works hard while Anupama stays quiet. Elsewhere, Vanraj is stunned by Kavya’s revelation that Anupama might have moved on.

Kavya is happy that Anupama will give divorce to Vanraj easily and they can get married easily. Later, Nandini confronts Anupama and apologizes to her.

She hugs her while Samar pushes Nandini away. He pushes her again while Anupama gets upset with him for disrespecting Nandini.

Nandini reveals that Vanraj and Kavya were about to get married in the temple leaving Anupama in shock. Nandini further tells that Vanraj was going to marry  Kavya on the same day of their marriage.

Baa wonders where Anupama is going while Anupama leaves in an auto. Elsewhere, Samar is not ready to forgive Nandini while she tries to make him realize her situation.

Anupama reaches Kavya’s house while Vanraj is about to leave. Vanraj hides when he sees Anupama and asks Kavya to not tell that he is there.

Kavya opens the door and tries to explain her situation. Anupama states she would have felt less pain if Vanraj was with an unknown woman.

Kavya declares that she wishes to marry Vanraj and that Anupama should give him a divorce. Anupama suggests Vanraj might not be loyal to her as well.

She further says she doesn’t care about Vanraj getting married to her or any other girl.

Upcoming Anupama episode update: Anupama confronts Vanraj about his decision of getting married to Kavya.

© Copyright tellybest.com, 2018, 2019, 2020. All Rights Reserved. Unauthorized use and/or duplication of this material without written permission from tellybest.com is strictly prohibited.
Cached Saved on: Tuesday 24th of November 2020 11:21:37 PM