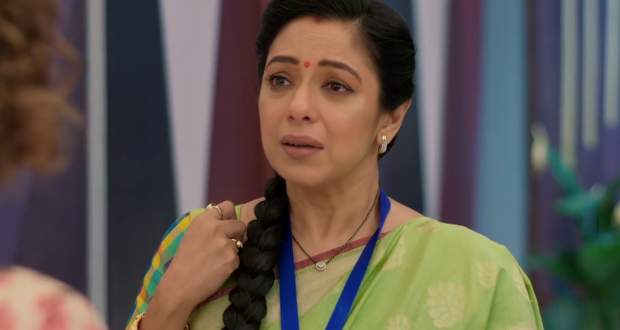 Today's Anupama 31 Jul episode starts with Anupama leaving the house and asking Samar to stay. Meanwhile, Kavya tries to console Vanraj and not get angry.

Vanraj is not happy with Kavya’s way of serving while Kavya gets upset. Later, Anupama reaches late while the inspection officers get upset with unprofessional behavior.

The principal is also upset with Anupama’s carelessness and feels disappointed in herself for hiring her. The principal further informs her that she has been fired and asks for the school ID-card.

She asks Anupama to take care of her family. Anupama leaves the school and remembers all the happy moments of her teaching. Elsewhere, Kavya gets upset with Vanraj for praising Anupama’s cooking skills and not her work skills after getting the deal.

Anupama reaches her favorite place and calls Vanraj. She asks him if she can visit her mother’s house and get permission. Anupama finds her nephew all happy with the camera.

She finds Ghungroo with her mother and decides to wear them. Meanwhile, Vanraj learns that Kinjal’s parents are coming to meet them in the evening and promises Toshi that he will try to bring Kavya.

Anupama vents out her frustration and emotions through her dance. She cries and reveals that she has lost her dream and her job.