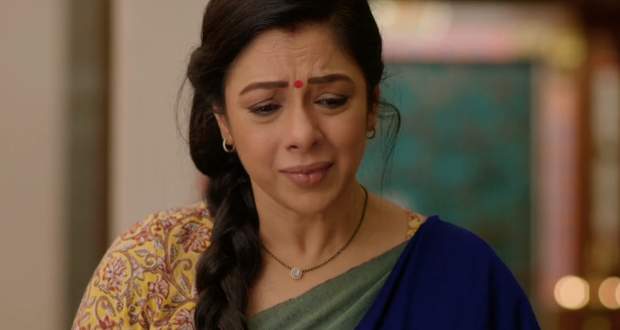 Today's Anupama 4 Sep episode starts with Vanraj going to meet Paritosh. Anupama stops him from going inside and shows him the sleeping pills she found in his pocket.

Vanraj gets shattered and states he never did anything like this even when he was upset with his parents. Meanwhile, Kavya is thinking about moments spent with Vanraj when Anirudh enters the bathroom.

Anirudh tries to get close to her while Kavya reminds him that their relationship is over. Anirudh points out that she is a second woman in Vanraj’s life and he will not let her go easily.

The Shah family discusses Paritosh’s condition and Anupama is ready to talk to him. Vanraj blames Anupama for everything as she has failed to handle the house.

He gives one last chance to Anupama to prove herself and gives an ultimatum of 24 hours. Vanraj further says if Anupama fails this time, he will handle the situation on his own.

Anupama gives lemon water to Paritosh the next day while he apologizes to Anupama. Vanraj witnesses the scene and is pleased with his decision.

Anupama reminds Paritosh of some childhood memories and asks him to not lose hope. She reminds him that Vanraj can’t even cry in pain and wants him to realize they all love him.

Anupama has taken the responsibility of making Kinjal his wife and wants some time. Paritosh is losing hope and feels helpless and depressed. He asks Anupama to save him.

© Copyright tellybest.com, 2020, 2021. All Rights Reserved. Unauthorized use and/or duplication of any material from tellybest.com without written permission is strictly prohibited.
Cached Saved on: Saturday 23rd of January 2021 06:48:51 AM