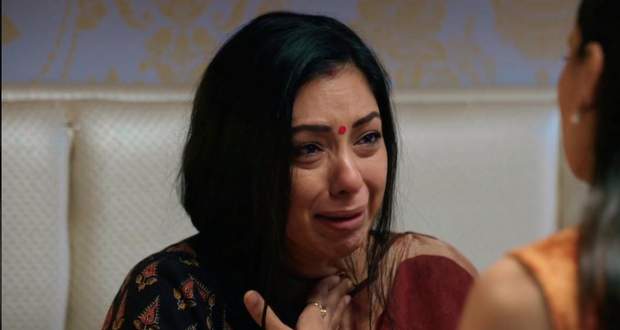 Today's Anupama 5 Oct episode starts with Vanraj scolding Anupama for not letting him live his life peacefully. Vanraj’s father scolds him for talking to Anupama in a rude way in front of his parents.

Vanraj intentionally scolds Anupama to impress Kavya on the phone call, while Kavya says to Vanraj that she will be happy when he will fix their wedding date.

Vanraj’s father taunts Leela for creating a conflict between Vanraj and Anupama and asks her why she denied in front of Vanraj that she didn’t ask Kavya to leave the house.

Later, Vanraj again scolds Anupama for insulting him in front of everyone and regrets the day when he agreed to marry her.

He pushes her out of his room and locks the door from inside. Anupama cries a lot on recalling Vanraj’s words and his voice echoes in her ears.

Anupama leaves from the main door of the house and cries while sitting in the corner of the garden. Devika reaches there and takes Anupama to her house. Anupama shares her feelings with Devika that Vanraj feels insulted when she is around him.

She tells Devika that she wanted to study after her marriage but Baa didn’t let her go to college and now Vanraj calls her an illiterate woman.

Anupama emotionally breaks down and says that she never got respect from her family. Devika gets emotional on listening to Anupama’s words and hugs her to calm her down.

Anupama decides to go back home in the morning but Devika tries to make her understand that no one would be bothered if she is not at home.

Anupama asks Devika to drop her home and feels grateful to her for always being a support to her. Devika mutters that she will definitely teach a lesson to Vanraj for his deeds.