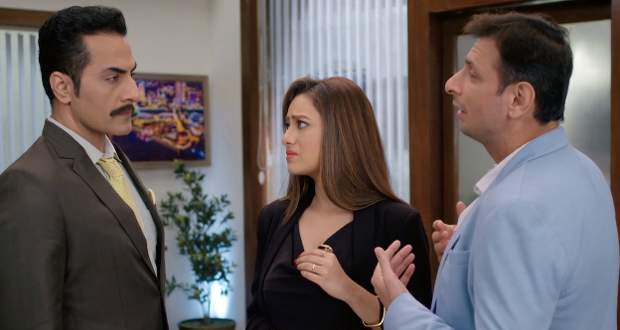 Rakhi refuses to let Kinjal meet Paritosh while Kinjal says she won’t talk to her as well. Rakhi ignores Anupama’s call while she calls on her driver’s number.

Kinjal’s father calls Anupama and fixes up his wife’s meeting with Anupama. He wants Rakhi to put efforts while Rakhi decides to break the relationship once and for all.

Paritosh asks Anupama to be on time and speak in English at the reception. He reminds her that her English is weak and she should not speak in front of Rakhi. She remembers the past memories when she taught everything to Paritosh.

Anupama assures Paritosh that she will make things right. She reaches the restaurant and asks for the café from one of the workers. Elsewhere, Kavya tries to tell Vanraj about Anirudh’s misbehavior.

Vanraj is distracted and doesn’t listen to her. Kavya gets upset with Vanraj and suggests Anirudh is right about him. At the same time, Anirudh arrives there drunk and claims his rights on Kavya.

Vanraj gets angry and they both get into a fight. Kavya asks them to not fight and take responsibility instead. Elsewhere, Anupama finds out Rakhi has reserved the center table and gets nervous.

Anupama further falls down because of her saree while the people around help her. Rakhi is pleased to see her scared while Anupama gets a call from Vanraj. He asks her to not insult him in front of anyone.

Upcoming Anupama episode update: Anupama says she has promised Paritosh while Rakhi agrees for the marriage.