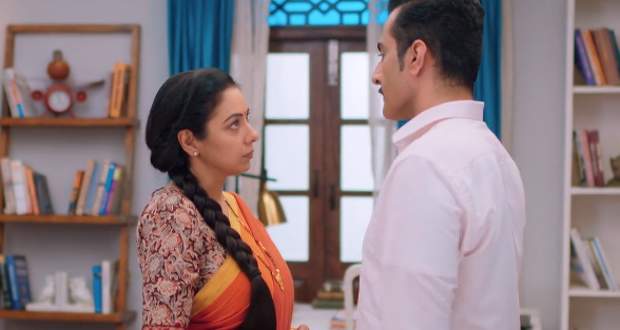 Today's Anupama 6 Nov episode starts with Anupama being on time for the dance classes. Samar gifts Anupama Ghungroo and Anupama decides to wear them in happiness.

Anupama remembers her father and that he gave her Ghungroo when she was little. She says her father wanted her to respect the art given to her by god.

Vanraj is upset as he can’t find his socks while Kavya gets irritated by his behavior. Meanwhile, Anupama starts dancing while Vanraj approaches the room.

Vanraj enters the room furiously and interrupts her dance. He asks her about his socks while Anupama takes out one sock from another.

Vanraj doesn’t like her dancing in the house while Anupama takes out the Ghungroo from her feet.

Vanraj wants Anupama to take care of him only. However, Anupama states she will not do anything for him and Jhilmil will take care of his personal things.

Vanraj throws Anupama’s Ghungroo on the mirror and the mirror breaks. He states that Anupama will dance but only on his instructions.

Bapuji asks Vanraj to make an appointment with the doctor while Baa thinks something is wrong. Baa wants to become a mother-in-law again and interfere while Bapuji asks her to stay out of the matter.

Samar cheers up Anupama and gets her ready for her first introductory class. The class doesn’t go well as Anupama is not able to communicate properly with kids.

She gives up while Samar again encourages her to keep trying till the end.

Upcoming Anupama episode update: Anupama challenges Vanraj while later Kavya wants him to tell the truth to his parents.

© Copyright tellybest.com, 2020, 2021. All Rights Reserved. Unauthorized use and/or duplication of any material from tellybest.com without written permission is strictly prohibited.
Cached Saved on: Sunday 9th of May 2021 09:26:27 PM