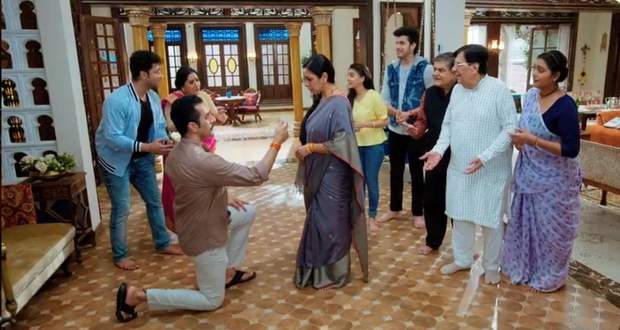 Today's Anupama 6 Oct episode starts with Anupama trying to get in her room and finds out that Vanraj has locked the room from inside. Vanraj gets a backache and looks for Anupama to apply the ointment on his back.

He then gets a phone call and rushes to meet that person outside. Devika meets him outside and scolds him for always treating Anupama badly.

She warns him that she will get him behind the bars for mentally torturing Anupama. Later, all the family members dance and sing together to boost up Anupama’s mood.

They celebrate Anupama and Vanraj’s 25 years of marriage, while Anupama hugs Baa and starts crying on recalling previous night’s incident.

Children decide to get Vanraj and Anupama married again on their 25th marriage anniversary. Anupama refuses to the plan but the family tries to convince her.

Further, Vanraj proposes Anupama to marry him again and his children ask Vanraj to kneel down in front of Anupama.

Baa takes out her ring and ask Vanraj to propose Anupama with the ring, while Kavya witnesses all this standing on the door.

Anupama rejects Vanraj’s proposal and leaves from there. Elsewhere, Kavya is hurt and decides to get all the things in her favour.

Upcoming Anupama episode update: Kavya to put a condition in front of Vanraj.