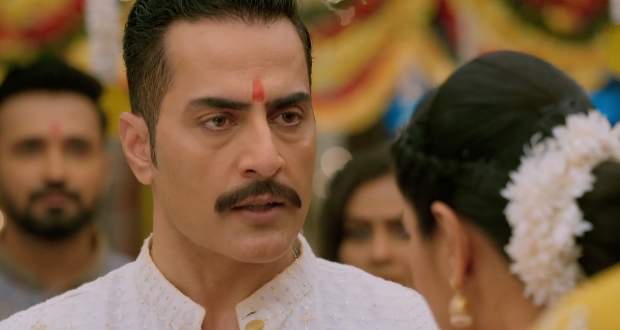 Today's Anupama 7 Aug episode starts with the Shah family enjoying their lunch. Vanraj comes late and is upset with Kavya’s message. Meanwhile, Samar is talking to his friend over a video call.

Varun wants Samar to stalk the Rakhi girl and Samar can also not stop thinking about her. Nihar shows his camera while Leela wants to know how he got it.

They are distracted by the shopkeeper who yells at their door. He asks for Anupama while Vanraj goes out to talk. He points at Samar and reveals Samar bought a camera from his shop.

He further reveals that Samar didn’t pay for it and the bill is in Anupama’s name. Leela understands the whole situation about Nihar’s camera while Vanraj shouts at Samar.

Samar and Anupama decide to protect each other from Vanraj’s anger. Vanraj sees the check of one thousand rupees in Anupama’s name and slaps Samar.

Vanraj gets mad at Anupama and also threatens to throw Samar out of the house if he makes a similar mistake. Vanraj taunts Anupama and leaves the house.

Sanjay tries to console Samar but he is more upset for his mother. Meanwhile, Leela is upset with Anupama and Bhavesh and asks them to bring 15 thousand within a day.

Kavya is ready to stay away from Anirudh if she is allowed to stay at his place. Later, Anupama searches for money in the kitchen boxes and feels terrible for Samar.

© Copyright tellybest.com, 2018 & 2019 & 2020. All Rights Reserved. Unauthorized use and/or duplication of this material without written permission from tellybest.com is strictly prohibited.
Cached Saved on: Thursday 24th of September 2020 02:58:24 AM