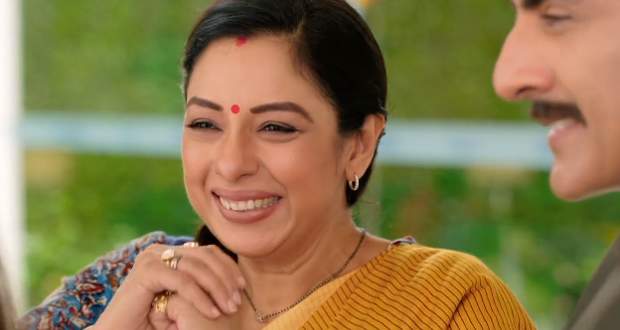 Today's Anupama 8 Sep episode starts with Anupama saying goodbye to Rakhi. At the same time, Vanraj and Kavya come to have lunch at the same restaurant while Rakhi taunts Aupama about them.

Vanraj lies to Rakhi about having a client meeting while Rakhi mocks him for being on a date with Kavya. Rakhi leaves while Vanraj asks Anupama about what Rakhi said.

Anupama gives good news to Vanraj while he holds her hands and expresses his happiness. Kavya gets jealous of their relationship. She asks Vanraj to leave as she will handle the meeting alone.

They are forced to wait in the lobby as Vanraj’s car tire gets punctured. Meanwhile, Rakhi tells the good news to Kinjal and she gets really excited about the wedding.

Anupama asks Kinjal to not tell Paritosh as she wants Vanraj to tell the news to him. Later, Vanraj is happy with Anupama’s efforts while Kavya continues to fume in anger.

They order lotus stems in the restaurant while Anupama reveals Vanraj is allergic. Kavya feels inferior to know so little about Vanraj. Kavya remains angry and wishes to leave while Anupama asks her to come along to their house.

Anupama sits in the front which makes Kavya even more upset. Meanwhile, Samar helps Nandini in fixing her electricity while both share some cute moments. Later, Kavya decides to get Vanraj in her life and remove Anupama from his life.

Samar asks Nandini for help to surprise Paritosh. They both dress as bride and groom to tell the good news to Paritosh the good news. Vanraj comes home and tells Paritosh his marriage is fixed.

© Copyright tellybest.com, 2018, 2019, 2020. All Rights Reserved. Unauthorized use and/or duplication of this material without written permission from tellybest.com is strictly prohibited.
Cached Saved on: Monday 30th of November 2020 07:12:53 PM