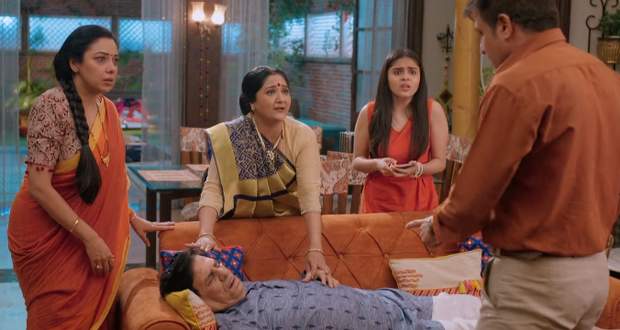 Today's Anupama 9 Nov episode starts with Kavya wishing to go on a date with Vanraj. Vanraj doesn’t react much while Kavya gets angry at him for ignoring her.

Vanraj tries to console Kavya and offers to stay the night. He calls home and informs Bapuji that he is busy with clients and will spend the night outside.

Bapuji feels uneasy and tells Anupama and Baa that Vanraj won’t come home at night. Baa blames Anupama for Vanraj staying outside while Anupama knows where he is.

Bapuji argues with Baa and doesn’t want Anupama to be blamed. He gets angry and goes into the room where he feels pain and falls unconscious.

Anupama and Baa rush to hold him and Anupama asks Pakhi to call Vanraj. Vanraj doesn’t pick the call as he is busy with Kavya.

Anupama feels helpless as she can’t drive while Samar gets a car from the neighbors. Anupama asks Pakhi to call everyone and take care of Baa.

Anupama reaches the hospital along with Bapuji and learns that he has suffered a heart attack. The doctor asks them to make a decision as they have to operate.

Anupama asks Samar to keep trying Kavya as well as Vanraj’s phone. Meanwhile, Vanraj’s phone’s battery dies and he keeps it on charging and sleeps.

Anupama learns from doctors that they have less time and Hasmukh needs to get operated on.

Upcoming Anupama episode update: Anupama decides to get Bapuji operated on while Vanraj criticizes Anupama for her decision.

© Copyright tellybest.com, 2020, 2021. All Rights Reserved. Unauthorized use and/or duplication of any material from tellybest.com without written permission is strictly prohibited.
Cached Saved on: Sunday 9th of May 2021 10:55:53 PM