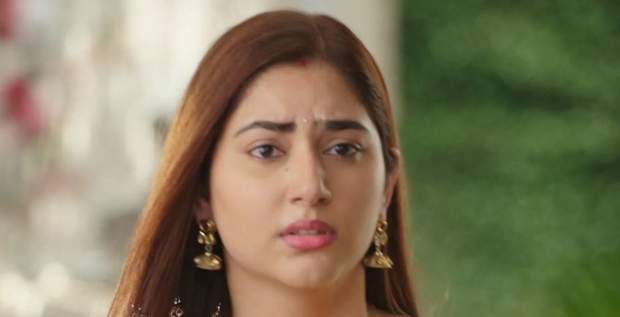 Today's Bade Ache Lagte Hain 2 15 October 2021 episode starts with Meera and her family coming to Ram's house. Nandini tells her that they came to know that Akki has signed some contract with a producer.

Nandini pretends to cry and request Meera to find Akki or else her daughter will be left at the altar.

At the same time, Priya comes there and says that this isn't true. Priya tells Shivina that Akki won't cheat her and tells everyone that Akki wanted the role to give Shivina a better life after marriage.

Shivina asks where is Akki and suddenly he comes and tells her and Ram that he had gone to convince the producer to allow him to take Shivi with him.

The producer doesn't accept so Akki leaves the opportunity to marry Shivina.

Later, Vrindha thanks Priya for handling the situation. Priya also tells Vrindha that Ram was eating noodles before the marriage. Meera overhears them and remembers seeing prawns in a plate of noodles outside the wedding hall.

After some time, Shivina comes there and tells everyone that she doesn't want Akki to lose the opportunity that he truly deserves. Shivina says that they should postpone the wedding for the next 15 days.