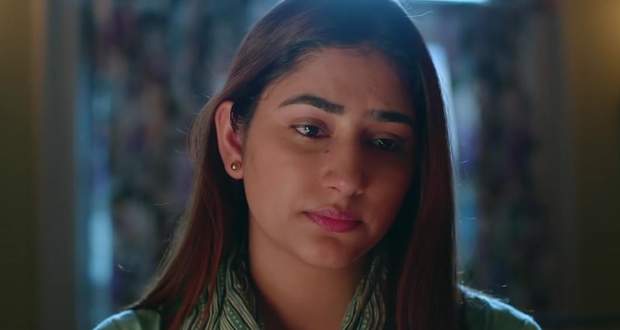 Later, Sandy is listening to Mami and another lady's conversation about wanting to have a child while Nani sees her and gets amused.

Elsewhere, Neeraj tells Maitri that Priya doesn't love Ram and talks bad about her while Adi tells Ram to look for his would-be-wife Priya.

Priya removes the makeup done by Sara while she is away when Mitali comes there and helps her do the makeup while introducing herself as Ram's friend.

Ram and Priya stand on the stage while Neeraj talks and about Priya saying that she's still not over him and says that she is still in love with him.

However, Mami and Nandini overhear them and get shocked while Mami asks Priya if she likes this guy.

Priya refuses while Nandini confronts Meera as Neeraj says that Priya has always loved him.

Priya announces that Neeraj was is past and that she has moved on now while he keeps on embarrassing her family along with Mama and Mami's taunts.

Ram manages to make a joke out of Neeraj's taunts and tries to lift the tense atmosphere while Nandini tells Meera that they should have informed them of it.

The Roka ceremony starts while Ram and Priya converse and he tells her that only his heart is broken, not trust.

© Copyright tellybest.com, 2020, 2021. All Rights Reserved. Unauthorized use and/or duplication of any material from tellybest.com without written permission is strictly prohibited.
Cached Saved on: Thursday 27th of January 2022 02:37:35 PM