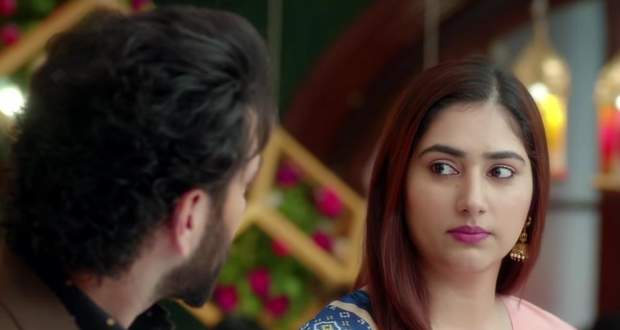 Today's Bade Ache Lagte Hain 2 16 September 2021 episode starts with Ram telling Priya that he still believes in love and asks her if she would like to meet his first lover.

She refuses while he talks about her as he jokes with her.

She tells him that she doesn't think of their marriage really while he tells her to act of laughing to make Neeraj jealous.

Akshay and Shivina exchange rings while Neeraj gets jealous seeing Ram and Priya laughing together.

Priya thinks of telling Ram about Mahindra while he thinks of having her meet Vedika.

Ram and Priya exchange rings while everyone cheers for them except Vedika and Neeraj.

Everyone starts congratulating them while Ram thinks of the similarities between them and says that they would do anything for their families.

Later, Akshay's mother taunts Priya while he tells everyone that his marriage is possible only possible because of Priya.

Akshay's mother tells Priya to contact her father but she refuses saying that she knows he won't come when suddenly Mahindra comes there shocking them.

Elsewhere, Ram tries to explain himself to Vedika but she stops him and leaves wishing him a happy married life in the future.

Vrinda takes Ram aside and tells him that she appreciates him for doing what he did for Priya during the function.

Meanwhile, Mahindra tells them that he argued with Rakhi and Raj as they were not letting him come to Priya's wedding so he left their house and requests them to let him stay there.

Akshay's mother complies with his request and everyone leaves to their room while Mahindra informs Shashi that he has entered the house.

© Copyright tellybest.com, 2020, 2021. All Rights Reserved. Unauthorized use and/or duplication of any material from tellybest.com without written permission is strictly prohibited.
Cached Saved on: Monday 1st of August 2022 10:38:14 AMCached Disp on: Thursday 11th of August 2022 11:08:02 AM