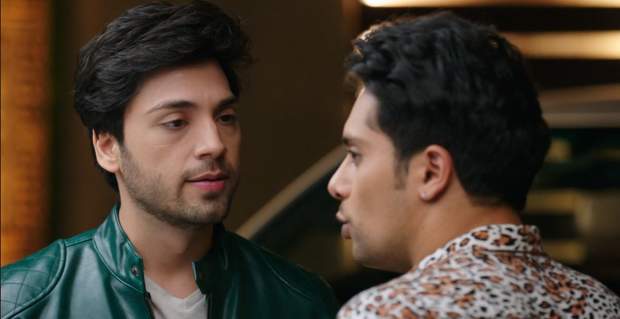 Today's Bade Ache Lagte Hain 2 20 December 2021 episode starts with Priya requesting Ram to remind Vedika about the payment to be done for the NGO.

Ram decides to tell Priya about his past with Vedika but not before their dinner date.

On the other hand, Vedika comes inside the hotel to search for Shubham and Sid but bumps into Akshay.

When Vedika comes to know about Akshay's poster, she realizes that Shubham and Sid are up to something against Akshay.

Meanwhile, Sara reaches Vedika's house where Shashi makes excuses for not making the payment for the stuff Vedika bought.

Shashi indirectly hints about Ram and Vedika's special bond and tells Sara that he'll ask Ram to make the payment.

At the hotel, Sid calls Anjali and explains the plan. Shubham tells Sid that Ram and Priya have arrived at the hotel.

On the dinner date, Priya gives Ram handwritten vouchers and promises to complete them.

Ram gets surprised and overwhelmed as the vouchers have things that Priya does not follow but agrees to follow when he uses the vouchers.

In the meantime, Akshay and Anjali are busy with the poster shoot but Anjali is worried as she has to accuse Akshay of sexual harassment.

Shubham texts Ram and comes to know that he is leaving the hotel.

On the other hand, Sid texts Anjali to get the work done immediately.

Upcoming BALH2 episode updates: Anjali confesses that she was given money to accuse Akshay of sexual harassment.

© Copyright tellybest.com, 2020, 2021. All Rights Reserved. Unauthorized use and/or duplication of any material from tellybest.com without written permission is strictly prohibited.
Cached Saved on: Thursday 20th of January 2022 09:49:38 PMCached Disp on: Friday 21st of January 2022 05:26:47 PM