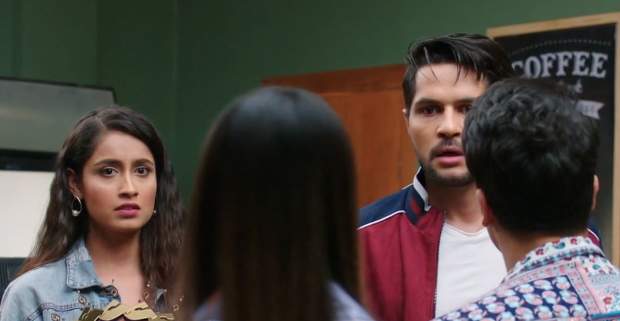 Priya gets angry and says that she doesn't care anything about Neeraj. Maitri warns Priya from trying to ruin her marriage.

At the same time, Ram sees Akshay going into the cafe and also finds Shivina and Anjali following him.

Inside the cafe, Anjali sees Shivina following Akshay and starts acting as if Akshay gave her money to hide the truth about their affair.

Shubham gets angry at Akshay and asks him how dare he cheats on Shivina. He holds Akshay's collar when Akshay raises his hand to slap him.

Suddenly, Ram comes there and stops Akshay. When Priya arrives at the cafe, she misunderstands that Akshay raised his hand on Ram and scolds him.

On the other hand, Vedika and Neeraj celebrate because they bribed Anjali to talk in their favor and she'll accuse Akshay of molesting her.

At the cafe, Ram and Shivina get convinced that Akshay cheated on her. Priya tries her best to explain to Ram that Anjali is lying but Ram does not listen.

While going out of the cafe, Meera and Sara come there and try to stop Ram but Shubham takes Shivina with him to the car.

In the meantime, Meera says that she didn't know anything about all this but she'll take care of Shivina.

As Ram is in anger, he addresses Meera as 'Aunty' instead of 'Meera Maa' which hurts Meera.

Upcoming BALH2 episode updates: Priya tries to find out why did Anjali change her statement.