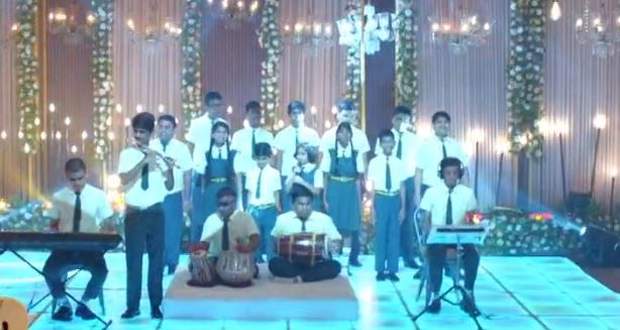 Further, they and Priya's sisters give a wonderful dance performance on the occasion of Ram-Priya and Shivi-Akki's sangeet.

On the other hand, Maitri and Sandy make Mamiji drink a lot of alcohol to get her drunk.

Later, Ram takes Meera to dance with him on the stage. Priya feels very happy seeing this and starts smiling.

Meanwhile, Raj's mother winds up Sid against Shivi, Akki, and Priya by showing a video of Shivi enjoying her sangeet.

At the sangeet, Matri and Sandy somehow take Mamiji to the room and delete the video she took of Priya and Neeraj.

Further, Raj and Sid reach the sangeet function while Sid is completely drunk and tries to get into the function hall.

At the same time, Ram calls for everyone's attention and tells that someone(addressing Priya) had suggested he should donate 20 to 30% of their income to the needy ones. Ram calls upon some children from Priya's NGO who are physically impaired for a special performance.

Sid comes inside the function and tries to hurt Priya but Shubham stops him and takes him away.