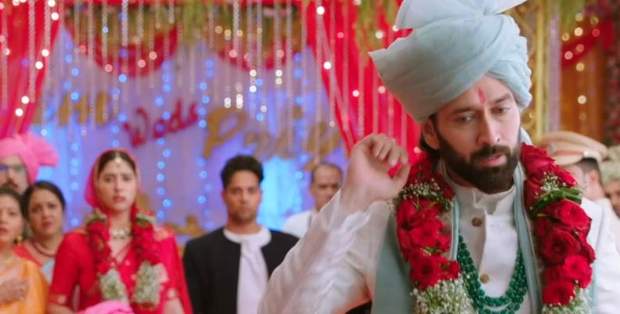 Today's Bade Ache Lagte Hain 2 6 October 2021 episode starts with the police asking Shubham to come to the police station with them. Shubham gets very angry with Priya and accuses her of taking revenge on him.

Further, Ram asks Priya why did she file a complaint against Shubham. Priya tries to explain that she didn't know the car which hit Sandy belonged to Shubham.

As the argument continues, Ram hands over the gatbandhan to Priya and leaves the hall.

Meanwhile, Mahindra is calling Shashi to ask who was the person who Mahindra killed in an accident many years ago on Shashi orders.

Suddenly, Meera comes there and asks him to save his daughter's breaking marriage.

On the other hand, Nandini asks Priya whether she thinks that her marriage with Ram is the right decision. Nandini tries to explain to Priya that they are not meant for each other and leaves from there.

Meanwhile, Ram is lying behind a car and is coughing badly. He gets an allergic reaction as he accidentally ate prawns.

© Copyright tellybest.com, 2020, 2021. All Rights Reserved. Unauthorized use and/or duplication of any material from tellybest.com without written permission is strictly prohibited.
Cached Saved on: Wednesday 3rd of August 2022 09:58:59 PMCached Disp on: Thursday 11th of August 2022 05:13:30 AM