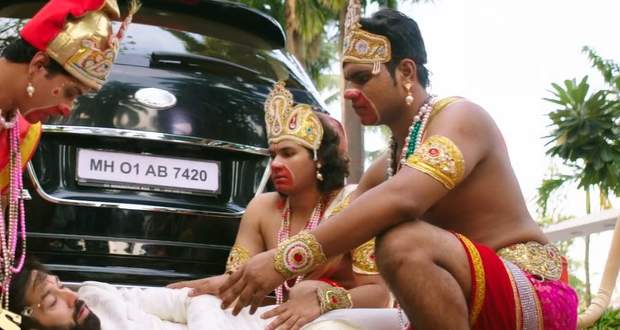 Today's Bade Ache Lagte Hain 2 7 October 2021 episode starts with Priya texting Ram to tell her on her face that he doesn't want to get married to him.

Suddenly, the people dressed as Hanuman and other vaanars who Priya met on her way to the wedding meet Priya. They ask her whether she met Ram but Priya tells them that Ram has gone away. They assure to bring back Ram and go to find him in different directions.

Priya goes back to the hall where Nandini tells that Ram will not come back.

Further, Priya says that she is not getting married anymore but Meera requests her to wait for Ram.

Suddenly, Ram comes there and says sorry for his behavior and asks Priya to marry him. Priya agrees to marry Ram on Meera's request and goes to the 'mandap'.

Priya and Ram complete all the rituals and finally get married.

Meanwhile, Sandy finds Mamaji's pone which has Priya and Neeraj's video, and throws it in the dustbin and pours water on it.