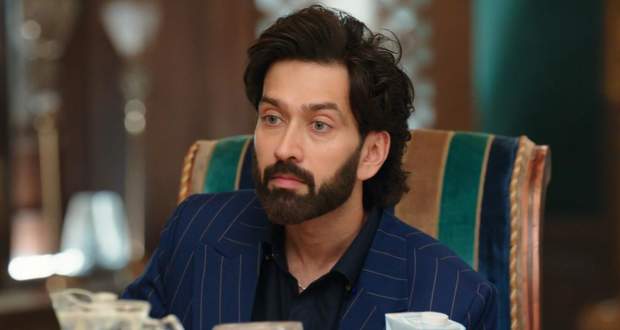 Today's Bade Ache Lagte Hain 2 10th August 2022 episode starts with Krish asking Vedika what she's doing there while she makes an excuse that she came to check up on Ishaan and leaves from there.

Elsewhere, Priya celebrates her birthday with Ram and Pihu while she thinks how he has fulfilled all of her dreams and desires even without his knowledge.

Back at Ishaan's house, he cries to Krish and reveals that he wants to inform Ram of the truth but fears that Ram will hate Priya once again.

Krish asks him why he wants to do such thing and Ishaan reveals that someone is blackmailing him about exposing the truth.

Meanwhile, Priya quizzes Ram and Pihu questions about each other and have a fun time after which Ram asks Pihu if she can call him something other than Mr. Kapoor.

Pihu asks him if she should call him Papa which makes him hesitant and he leaves recalling the night when Priya told him that he is not the father of Pihu.

Elsewhere, Nandini is talking about getting Ishaan's confession to Shubham while drinking.

Just then, Shubham bumps into a servant who drops an envelope which Shubham takes and leaves.

Nandini reads the document and gets shocked seeing that the Ram has sold the property that he had given to Shubham so that he can give the money to Priya and gets angry.

At the same time, Ram sits with Adi and talks about the idea of giving Priya and Pihu money while Adi calls him stupid for thinking such thing.

On the other hand, Krish comes to meet Priya and scolds her for not answering his messages and spending time with Ram.

Krish further tells Priya about Ishaan getting the threats and reveals that he doubts Vedika.

However, Priya says that she's sure it's Nandini and goes to her.

Back at the bar, Ram justifies his actions and tells Adi that he can't see Pihu suffering.

Priya confronts Nandini who retorts back saying that she knows Priya saved Ishaan.

Priya also tells Nandini that she knows Nandini's intention is to play games to keep her away from Ram.

Nandini threatens to reveal the truth to Ram while Priya says that she herself will join her and will tell Ram the truth as she knows Ram will not put Ishaan in jail.

© Copyright tellybest.com, 2020, 2021. All Rights Reserved. Unauthorized use and/or duplication of any material from tellybest.com without written permission is strictly prohibited.
Cached Saved on: Sunday 2nd of October 2022 12:05:33 AM