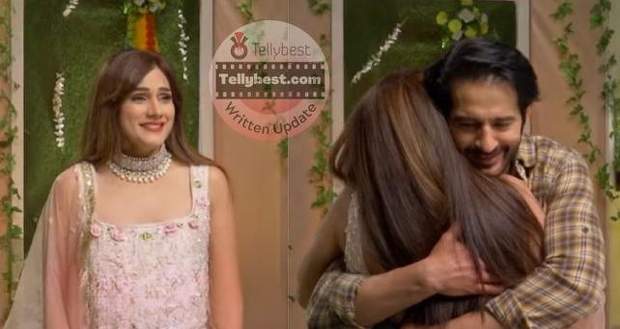 With a veil covering her head, Swati just knocks on Ram's door and asks him to please give Lakhan one more chance.

Ram listens to Swati's pleadings with tears in his eyes as he remembers his own mother.

Before Ram can open the door and talk to Swati face-to-face, Swati makes a quick escape and goes downstairs.

Meanwhile, Priya is anxious as her heart tells her that what if Lakhan's mother could be Ram's mother too?

She sits down with Meera by her side as the Mehendi artists design Mehendi on Priya's hand.

Ram treads downstairs and is almost on the verge to tap on Lakhan's mother's shoulder but Pihu interrupts him.

Pihu asks Ram to dance with him and he has to oblige.

Meanwhile, Lakhan arrives outside the Kapoor Mansion and messages Avani that he is waiting outside for her in a taxi.

When Siddharth and Shubham leave her alone, Avani goes outside to meet Lakhan without telling anyone.

On the other hand, the Kapoors celebrate the Mehendi function with great delight and laughter.

When the dance is finished, Priya sees Lakhan's mother's necklace drop on the floor and goes to see her.

Yash then asks Veena where Avani is.

Panic strikes everyone when Avani is not found even when Brinda and Sarah check all the rooms upstairs.

Yash suspects Lakhan's hand in this while Ram questions Tarun whether he saw Avani recently or not.

Tarun tells Ram that he saw Avni Ma'am outside with a man and Ram suspects the man to be Lakhan.

Outside, Swati is almost leaving until Priya calls her out as Swati Kapoor.

Swati stops in her track as Priya sees her face and gets shocked.

Priya's voice gets choked as she realizes that Ram's real mother is still alive and bends down to get her blessings.

Priya asks Swati whether Ram is aware of her or not but Swati asks Priya to forget what she saw.

Swati leaves when she hears Ram's thunderous voice informing Priya that the Gunda Lakhan made Avani run away with him.

Swati gets shocked while Yash Khanna makes a scene inside.

In between, Shubham also sees an official document where Ram has transferred all his property under Priya's name and he lashes out at Siddharth.

However, Shubham says this won't be possible if Priya dies.

Priya doesn't tell Meera about Swati and Meera asks Priya to take some rest since she is pregnant.

The weather gets worse as Avani and Lakhan reach the bus station to escape the city.

However, Ram traces them and blocks Lakhan's way.

Lakhan taunts him for bringing an army with him (Aditya & Vikrant) while Ram retorts, asking Avani not to be afraid since Lakhan would have forced her to come with him.

Meanwhile, Yash screams at Swati for raising a son like Lakhan along with Shubham.

Priya comes there and scolds Shubham for talking to Swati like this.

Elsewhere, Ram and Lakhan butt head against each other as Ram informs Yash via the call that Lakhan is with Avani.

© Copyright tellybest.com, 2022, 2023. All Rights Reserved. Unauthorized use and/or duplication of any material from tellybest.com without written permission is strictly prohibited.
Cached Saved on: Wednesday 25th of January 2023 01:16:40 PMCached Disp on: Wednesday 1st of February 2023 09:28:35 PM