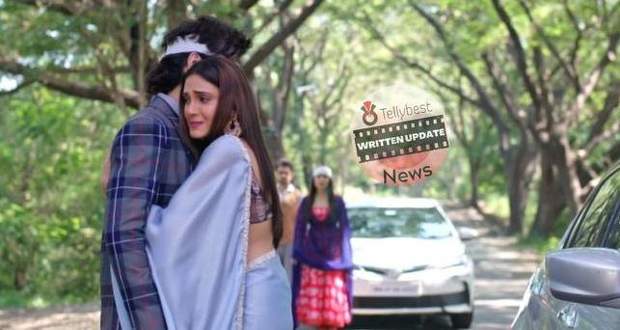 Today's Bade Ache Lagte Hain 2 10th November 2022 episode starts with Ram asking the driver to follow Vedika’s car while talking to Nandini as she asks him to stop Vedika at any cost.

Meanwhile, Priya asks Krish why everyone is not speaking to her about Ram and asks him to take her to Ram quickly.

Krish slowly tells Priya that Ram does not want to see her as he has forgotten all about her and Pihu.

Priya is left shattered and asks Krish if he is joking with her as it is not a good thing to do.

Krish makes Priya realize that he is dead serious about the matter and tries to comfort Priya while she sits blankly in shock.

Suddenly, Ram’s car crosses Priya’s car and stops in front of Vedika’s car to stop her.

Priya thinks that Ram is there for her and gets out excited only to witness Ram holding Vedika’s hand and confessing his love.

Ram shares a warm hug with Vedika and asks her to come home while Priya stands there with a broken heart.

Ram and Vedika leave while Nandini comes there laughing at Priya.

Nandini tells Priya how she did not have to do anything this time to separate Ram from Priya and celebrates her victory.

Priya starts to laugh too making Krish and Nandini shocked as to why she is laughing in such a situation.

Priya tells Nandini that she believes that her and Ram’s love will find its way to reunite them as it always has.

Nandini’s face changed into a terrified one as she remembers how Priya and Ram always get together at the end.

Priya points at Nandini’s face and announces that she is ready to do anything and everything to make Ram remember about her and Pihu.

Meanwhile, Pihu refuses to eat anything as she thinks about Ram not recognizing her at the hospital.

Suddenly, Priya appears in a fairy getup while Krish creates fog with a smoke machine.

Priya tells Pihu that she is the truth fairy and she knows about Pihu’s secret wish about having a father.

Comforting Pihu, Priya tells her that even though she thinks that she has lost her father, it is not true and she has to go on another adventure to make sure her father remembers everything.

Pihu cheers up hearing that and leaves to draw her family with Priya and Ram.

Priya assures everyone that she is fine and announces that she is ready to do whatever to make sure Ram’s memories return.

On the other hand, Nandini gives Ram a new phone so that he cannot see Priya’s contact and asks him to restart his life.

Ram decides to join the office the next day while Aditya prays for a miracle to take place.