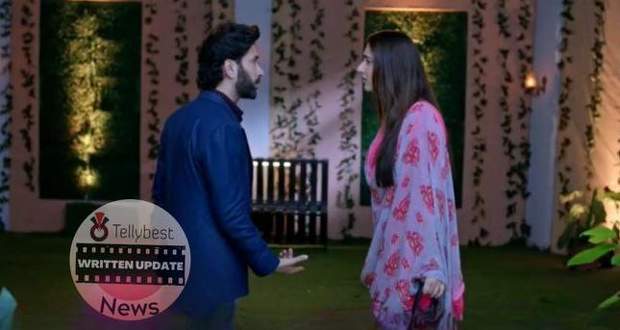 Today's Bade Ache Lagte Hain 2 10th October 2022 episode starts with Priya deciding to leave while Ram asks her about the scarcity that was left in his love which made Priya leave him.

Telling that he missed Pihu's first walk, & everything that Priya, him, and Pihu could have experienced together, Ram feels defeated.

Pressing his forehead against Priya's, Ram asks Priya what he should do about his stupid heart that feels so much for her.

Priya closes her eyes as her nose touches Ram's nose and she asks Ram to let her go before anyone catches them like this.

Ram says no but Priya states she has to go, leaving Ram alone.

At Sood house, Shubham greets a surprised Priya and states she is manipulating Ram by stopping him from transferring money to Shubham's account & using it for Pihu's trust fund.

She then asks him if Ram is going to keep the fast as Priya also keeps Karva Chauth for Ram for many years.

Back at Sood house, Shubham screams at Priya claiming that Priya is using Pihu to control Ram.

However, Priya tells Shubham that Pihu has all the rights over her father's love.

Shubham leaves angrily & calls Nandini to do something about RaYa.

Meanwhile, Pihu tells Ram it is the same fast Priya used to keep for her prince charming, Aka Ram, while Ram asks how Priya used to culminate her fast.

Pihu smiles, stating Ms. Sood used to break it while looking into Pihu's eyes since Ram and Pihu's eyes are the same.

A confused Ram gets even more confused as he realizes Priya wants to be with him but is hiding something.

The next morning, Priya calls Ram to ask about Pihu's health while he asks Priya if she had any breakfast.

When she hesitates to speak, he realizes that Priya has kept the fast for him while Priya feels bad that Ram is not keeping the fast for her.

Afterward, Nandini tells Ram that she has planned Pihu's admission to a school whose interview is today.

Back at Sood house, Priya feels awkward once she realizes that her teacher interview is scheduled at the same school where Nandini has fixed Pihu's admission.

Sandy laughs and enacts RaYa's position in the kitchen when they were both making waffles when Ram comes unannounced.

He holds Priya tightly to him, telling Sandy this is how he did it while Sarah begins to cough making Priya feel embarrassed.

Priya then scolds Ram when he forces her to eat but he feels happy inside that she has still kept Karva Chauth vrat for him.

On the other hand, Adi & Vikrant advises Pihu to give the interview confidently.

Pihu tells Ram she is scared of giving the interview while Vedika asks Sandy to bring some sandwiches for Pihu.

She immediately says a big 'No!' while Ram asks Sandy to bring some for Priya as well, to tease her.

Priya then hands Ram the ghee roast while he ignores it for later.

Pihu forgets the table of 2 while Vedika knows it is happening because Pihu is on an empty stomach.

© Copyright tellybest.com, 2022, 2023. All Rights Reserved. Unauthorized use and/or duplication of any material from tellybest.com without written permission is strictly prohibited.
Cached Saved on: Monday 21st of November 2022 05:07:59 AMCached Disp on: Friday 9th of December 2022 05:15:41 AM