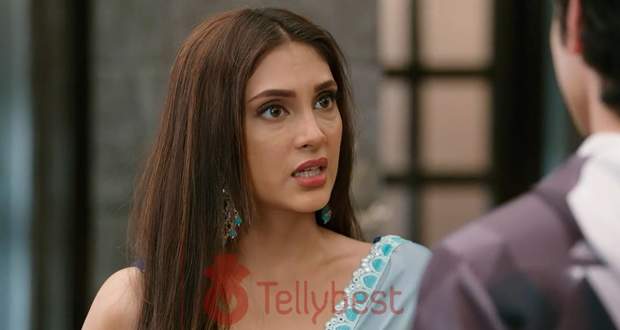 Today's Bade Ache Lagte Hain 2 11th August 2022 episode starts with Priya and Nandini confronting each other regarding the truth behind Shivina’s death.

Just then, Pihu and Ram come there and interrupt Priya and Nandini’s conversation with their questions.

Nandini tells Pihu that she will be scolding Priya as she does not take care of herself and falls sick.

Pihu also agrees with Nandini and says that Priya was sick for two years in the past and could not meet with her.

Hearing this, everyone understands that Pihu is talking about Priya’s time in jail but remains silent.

After Ram and Pihu go back to their room upstairs, Priya asks Nandini what she wants and why she is doing these things.

Nandini says that she wants to remind Priya of her status and wants her out of the house after two days.

Priya promises herself that she will help Ram by revealing the true face of Nandini in front of him.

Meanwhile, Ram styles Pihu’s hair while making fun of her and makes Pihu happy by making a cute hairstyle.

Pihu asks Ram if she has a daughter or sister whose hair, he used to make in the present leading to Ram remembering Shivina.

Nandini meets Vedika as she promises Nandini that Ishaan will go to jail and Pihu will get to know about Priya’s truth.

Priya comes and asks Pihu if she was the one who switched off her phone in the bakery to which Pihu denies it.

Hearing Pihu, Priya understands that it was Ram who did it and goes to the washroom after sending Pihu downstairs.

Ram follows Priya into the washroom and explains why he did that because he did not want anyone to interrupt their moment.

However, Priya takes it the wrong way and tells Ram not to touch her phone next time.

This angers Ram and he expresses how his life has been shattered since Priya betrayed him with Krish.

Ram says that he hates it when Krish tells him to stay within his limits because he is Priya’s ex-husband.

In the meantime, the shower turns on mistakenly and both Ram and Priya get soaking wet while standing underneath it.

Pihu enters at that moment and says that Ram has fulfilled all three of her wishes by making it rain.

The next day, Ram and Pihu feed each other breakfast after which Pihu takes her medicines.

As the topic of forgetting to take medicines comes into discussion, Pihu tells everyone that Nandini also forgets to take her medicines.