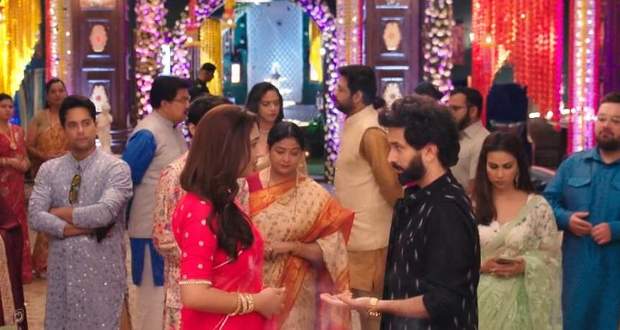 Today's Bade Ache Lagte Hain 2 11th July 2022 episode starts with Pihu remembering Priya’s words about behaving herself with Ram and deciding to apologize to Ram by herself.

Pihu makes a sorry card on her own but writes Mr. Kharoos in that by mistake.

When Pihu goes to Maitri to ask for a new paper, Maitri experiences stomach pain suddenly and collapses on the sofa.

Pihu hastily calls Neeraj and he calls the doctor immediately without wasting time.

Meanwhile, Kanika says that the mall incident can just be a mere made-up story as it does not have any evidence.

As Shubham and others speak in Ram and Priya’s defense, Kanika questions why Priya is not wearing vermilion on her forehead.

Ishaan jumps in to save the day and tells Kanika that Ram will fill Priya’s forehead with vermilion with his own hands after it is presented to the god in the puja.

Meera helps Ishaan by saying that she had wished for this to happen if Ram and Priya ever decided to be together again.

Vedika scoots closer to Nandini and asks if Ram has to fill Priya’s forehead with vermilion in front of everyone.

As Meera goes to get the vermilion, Nandini appears before her and warns her to stop what she is trying to do.

Meera tells Nandini that all the things going on is merely the wish of the god and even if Nandini tries numerous times to stop things, what is bound to happen will not be stopped.

On the other hand, Pihu apologizes to Maitri for giving her stress and bringing fruits for her.

Neeraj takes Maitri inside her room to rest while Pihu asks the doctor to take her to Ram Kapoor’s house because she is his daughter.

The doctor agrees and drops Pihu in front of Ram’s house but the security guards stop Pihu from entering.

However, Pihu somehow manages to swindle the security guards with her innocent eyes and childish banter.

Elsewhere, Priya feels happy inside as she is getting to relive a moment with Ram but thinks that Ram is worried about Vedika.

On hearing Priya asking to proceed as this is all a drama, Ram feels bitter and tells her that she wants to escape from him at the earliest.