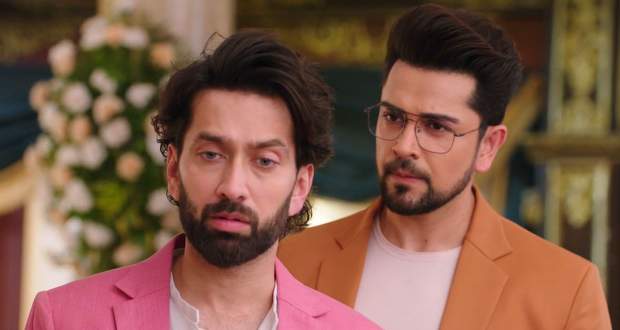 Today's Bade Ache Lagte Hain 2 11th May 2022 episode starts with Varun sneaking out to meet Shashi to inform him about the papers being with Sara.

When Varun mentions Priya going to meet Santosh, the manager, Shashi leaves to threaten Santosh to keep him blabbering the truth before Priya.

Meanwhile, Ram brings Priya downstairs, having a wide grin on his face, believing Priya is pregnant.

Everyone starts congratulating Priya as Ram discloses Priya’s pregnancy while Priya in the spotlight wears a stunned expression on her face.

The disappointment clouds over Ram when Priya makes it clear that she ain’t pregnant while Nandini sighs in relief.

After arriving at the manager's cabin, Ram tells the manager, Santosh that he is the only one who has answers to Ram's questions.

Eventually, Santosh speaks up and says that Sahil Babbar a.k.a Shashi's father had bailed his father, Sanjeev.

Santosh also adds that Sahil had mentioned the truth about Virendra to him.

When Ram asks what truth he is speaking about, Santosh says that Virendra wanted to illegally construct the resort.

Krish keeps on directing Ram on the call to ask relevant questions from Santosh.

Santosh cunningly dodges the questions by putting the entire blame on Virendra Kapoor, making him come out as the bad person.

Ram angrily thrashes the objects on the table near him, losing his calm.

Meanwhile, everyone including Priya and Nandini gets stunned to see Ram's reaction.

Aditya claims Santosh to be lying and Nandini breaks down claiming her husband couldn’t do such a thing.

On the other hand, Varun and Shashi rejoice as everything goes as per their plan.

Shashi revisits the memory lane where he calls Santosh, filling him up with the lie that he has to convey to Ram.

Furthermore, Priya gets worried about Ram as he leaves the office in anger and disconnects the call.