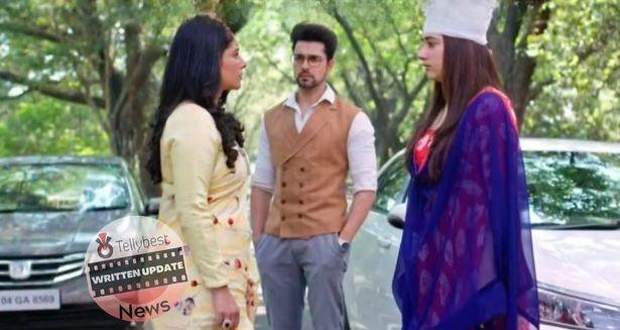 Today's Bade Ache Lagte Hain 2 11th November 2022 episode starts with Priya spotting Ram at the medical shop by coincidence and getting happy inside her heart.

Priya remembers the doctor’s words about Ram getting trauma if anything related to his forgotten past suddenly appears in front of him.

For the sake of Ram’s health, Priya decides not to go in front of him and watches him from a distance.

The cashier asks Ram for cash, and Ram steps outside to get some from Aditya.

Priya pays for both her and Ram’s things and leaves the shop to see another glimpse of Ram.

After Priya gets out of the shop, Ram returns and learns that another lady named "Ms Sood" has paid for his things.

Hearing that name rings something in Ram’s brain as he sees foggy flashbacks of Priya’s face.

After getting Priya’s number from the cashier, Ram calls her while Priya gets upset about not seeing Ram anymore.

Priya gets lightened up on hearing Ram’s voice but fails to bring herself to talk to him.

Ram hangs up after saying thank you and tells Aditya how he feels that the other person was uneasy for some reason.

Later, Priya goes to Ram’s company for a job so that she can stay close to him but the manager refuses at Nandini’s commands.

Nandini tells Priya that she will ensure that she does not get to come close to Ram.

However, Priya replies that her love will take her to Ram regardless of opportunities.

On the other hand, Ram’s personal secretary takes a leave for her pregnancy making Ram and Vikram think about how to appoint a new one.

Later at night, Priya and Sandy decide to go on a dinner together with Sandy gifting Priya special flowers.

Priya sends the bouquet of tulips addressed to Ram wishing him to get well soon.

Ram reaches the same restaurant to attend a dinner date with Vedika and gets uneasy about seeing her waiting for him.

Vedika tells Ram that she needs a bit of time to cope with her relationship with Shashi to which Ram happily agrees with her.

On one hand, Ram asks Vedika to start their relationship with friends, on the other hand, Priya tells Sandy that she will become friends with Ram first.

After Priya and Sandy reach the restaurant, they see Ram dancing with Vedika, and Priya gets hurt.

Ram gets flashbacks of him dancing with Priya and gets lost in his thoughts making Vedika fall to the ground.

© Copyright tellybest.com, 2022, 2023. All Rights Reserved. Unauthorized use and/or duplication of any material from tellybest.com without written permission is strictly prohibited.
Cached Saved on: Monday 21st of November 2022 08:44:51 AMCached Disp on: Monday 5th of December 2022 12:06:38 AM