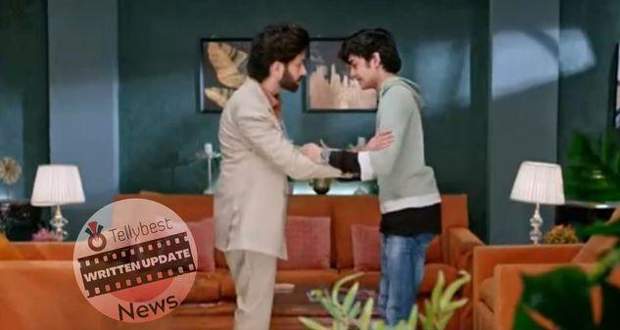 Ram includes Priya in the game but since it would require eating, Priya says no.

Both Ram & Pihu become shocked and exclaims 'How rude!' at Priya after Priya asks Ram to be the only player since he likes stuffing food and winning.

Aditya then asks Pihu the sum of 2 + 2 while she answers 5 and sings a cheesy Bollywood song so she doesn’t have to eat the cupcakes.

Priya stops after 5, making Sandy curious about her cluelessness.

Vikrant & Adi throws their hands in the air, saying Pihu has to be nervous since her parents are dumb and silly.

Later, at Kapoor Mansion, Nandini takes Pihu upstairs along with Vedika to get her to change before the interview.

However, Vedika quickly hides an itching powder in Pihu’s wristwatch and belt so these chits come out at the time of the interview to showcase Pihu as a 'cheater'.

At Sood house, Sandy & Sarah asks Priya to tell Ram about her feelings but Priya knows their future is not easy as long as Shubham and Nandini are in Ram’s life.

Afterward, Ram, Priya, and Nandini accompany Pihu to her interview and the principal gets impressed by Pihu’s intelligence & simplicity.

However, Pihu’s hand itches and the chit rolls out in which the table of 2 is written.

Nandini pretends to be worried while the principal scolds both Ram & Priya for their poor parenting.

Telling that she is not a cheater, Pihu storms out of the office crying, followed by Priya.

Priya hugs Pihu protectively while Pihu is worried about Mr. Khadoos calling her a cheater.

Meanwhile, Nandini tries to influence Ram’s mind but leaves after Priya glares at her.

Ram tells Priya they have to go by the proof but Priya firmly states that Pihu cannot cheat.

Just then a crying Pihu arrives and asks Ram if he doesn’t trust her.

Pihu then faints in Ram’s arms, causing a panic while Ram takes her to a doctor.

In the hospital, Pihu opens her eyes slowly and denies drinking water & Priya guesses the reason.

Priya then asks Pihu if she has kept a fast and Pihu nods.

Ram’s eyes become tearful after Pihu confesses, she kept a fast so both her parents can be happy together.

Using Priya’s dupatta as a sieve, Pihu opens her fast while Ram makes her drink water and Priya feeds her the Upma she made for Ram.

Afterward, Pihu asks Ram to open Priya’s vrat as well while Ram pretends to be oblivious.

© Copyright tellybest.com, 2022, 2023. All Rights Reserved. Unauthorized use and/or duplication of any material from tellybest.com without written permission is strictly prohibited.
Cached Saved on: Monday 21st of November 2022 06:04:05 AMCached Disp on: Wednesday 7th of December 2022 01:11:58 PM