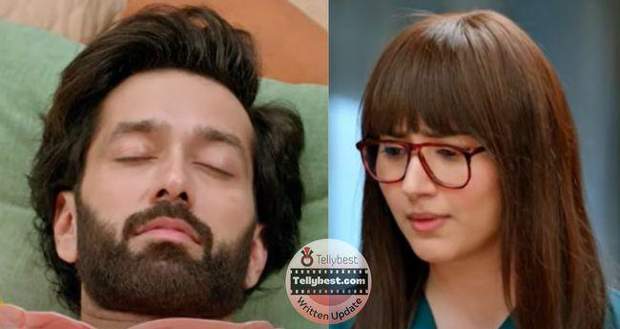 Priya who is here at Kapoor Mansion like Lovely, calls Aditya and asks him to make sure nobody disturbs her by the time she meets her husband (Ram).

Vedika gets jealous at Priya's wording and Vedika says that the only person who supported Priya is unconscious now and out of his memories.

Priya digs into her phone and shows Vedika a clip of herself going to Lovers Cafe to threaten Pihu.

Aditya eyes Vedika disgustingly as Lovely states that she cannot wait to find out the face behind the video and show it to Ram and finally warns Vedika about ever going close to Pihu.

Priya breaks down in Ram's room and massages his hand, asking him to wake up and come back to her as she and Pihu wait for him.

Meanwhile, Nandini expresses her worry to Shubham, saying she cannot let Ram get back his memories, or "they" will come on the road.

Shubham corrects Nandini and asks her to do something for herself as he had already proved Ram by giving an impressive presentation to Singhania.

On the other hand, Priya turns on the AC in Ram's room and sleeps beside him.

Ram grins when he sees Lovely beside her and cutely touches the bridge of her nose.

Priya wakes up by his touch and gets confused about whether Ram remembers everything or not.

She greets him good morning while Ram goofily smiles and says how can he forget this weird haircut and these glasses that hide such a beautiful face underneath?

Priya cries, making Ram think that he has hurt Lovely. Ram immediately apologizes and hands a tissue to Priya saying, it sometimes feels that all his tissues are made for her only.

After advising Ram not to overthink and take his medicine on time, Priya leaves and gets confronted by Nandini downstairs.

With an over-smart tongue, Nandini asks Priya not to ever show her face again in Kapoor House while Priya hands her a legal document stating she can drag Nandini to court if she tries to hamper her job.

At Sood House, Sarah and Vikrant try to placate a nervous Meera, mourning about Ram still not recovering his memories as this time the hopes were high.

Pihu hears their adult conversation and goes outside to greet Priya who must be feeling sad.

Once Priya sees Pihu, she tells him that they lost but Pihu enthusiastically reminds her mother that they haven't lost, their victory has just begun.

She hands a bowl of ice cream to Priya and asks her if Ram said I love you to her. Priya chuckles and agrees, saying he later made fun of Lovely's hair.

Pihu giggles and tells Priya that Ram is right since her hairstyle is out of fashion.

Meanwhile, Nandini fills Ram's ears against Vedika at the breakfast table, saying she shouldn't have forced him to spend time with her.

She then brings Lovely's topic up and informs Ram falsely that Lovely's divorce still hasn't been finalized with her husband.

Internally Nandini doesn't want Ram to feel the same emotion he used to feel for Priya and advises Ram to help Lovely fight her husband since she is a part of his company now.