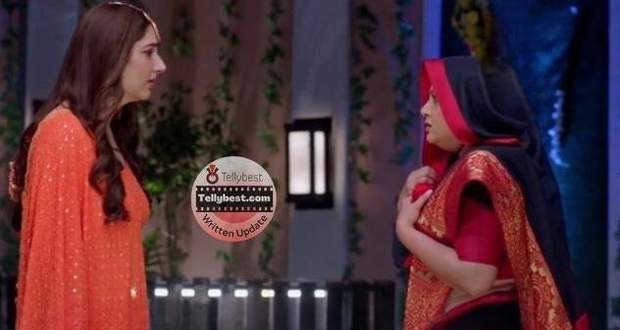 Sid decides to do something about Lakhan himself as no one else is stepping up.

Priya tells Ram about Lakhan in an indirect way

Meanwhile, Priya enters Ram's room and asks if he's thinking about Lakhan at which Ram expresses that everything was going perfectly fine until all these new people arrived in their lives and messed everything up.

Priya says in concern that everything is destined to happen and he should accept that, as at the end of the day, even Ram couldn't get Lakhan arrested because he felt some connection with Lakhan's mother, and this type of cosmic relationship is called destiny.

Ram says that he loves this version of Priya, who explains to him to look at things from a different perspective just like his mother.

Priya asks Ram what happened to his real mother and tells him that she doesn't mean to upset him but she's curious to know.

Ram tells Priya about a night when he couldn't breathe because of the smoke, he got an asthma attack and was taken to a room by a few people.

Ram waited for his mother to arrive and give him her homemade medicine but instead, his dad came and told him that his mother is very ill.

The next day Ram was told that her mother has died and Nandini came into his life that very moment and started taking care of Ram.

Priya thinks to himself why did Ram's father lie to him about Swati's death and brought Nandini into their lives?

However, Pihu interrupts them and says that tomorrow is their wedding and they should have a lot of fun today.

Pihu excitedly says that she wants a baby sister and after that Ram will have 3 princesses. She then says that she has written a letter to them on her little sister's behalf.

She goes on and reads the letter and says that she didn't know that her parent's love story is like a fairy tale as they came back together after drifting apart. She loves their cute little fights filled with love and apologies.

Pihu says that she gets tensed when they do not talk to each other, and she promises her parents that they will always be together.

They all lean into a big family hug while Sara enters with a bowl of Haldi.

Pihu scolds Ram that she has made all the arrangements for their wedding but who has taken charge of doing the Knot (ghatbandhan) as it is the mother's responsibility.

After some time Pihu tells them that she has called Meera for making their knot, however, Priya thinks that she will use this opportunity to make Swati do the Ghatbandhan.

The Kapoor family breaks into a cute haldi fight after that, Pihu takes Sara and leaves their room.

Pihu tells Sara that she didn't write any speech but just poured her heart out to everyone and pretended to read it from the paper.

The next day, the wedding preparations begin, Ram, asks Aditya if he has made the papers that he asked him to.

Aditya affirms that he has made the papers and there is nothing he needs to worry about.

Ram asks Brinda not to let Priya go out of the house today as he doesn't want the past to repeat itself.

Meanwhile, Meera searches for Priya but couldn't find her anywhere in the house because she has gone to visit Swati without informing anyone.

Priya reaches the Soodh house and calls Swati to come and meet her there but she did not realize that Lakhan is on the other end of the call.

Lakhan thinks to himself why did Priya call Swati and starts looking for his mother to ask this himself.

However, he finds a note written by Swati in the room saying that she has gone to the bus stand and will be waiting for him, he only has 2 hours to meet her there or else he will never see her face again.

Lakhan blames Priya and Ram for the growing distance between him and his mother.

Back at Kapoor's mansion, Brinda and Meera looks for Priya everywhere but can't find her.

Ram overhears them and starts calling Priya. To stop Ram, Brinda makes an excuse and says that Priya has gone to buy a surprise gift for Ram.

Aditya plays along with Brinda's lie and asks Ram to practice looking surprised when Priya comes in with her surprise.

Meanwhile, Lakhan reaches Sood house and asks Priya to tell him what she wants from Swati that is so important.

© Copyright tellybest.com, 2022, 2023. All Rights Reserved. Unauthorized use and/or duplication of any material from tellybest.com without written permission is strictly prohibited.
Cached Saved on: Wednesday 25th of January 2023 06:20:29 PMCached Disp on: Monday 6th of February 2023 05:50:31 AM