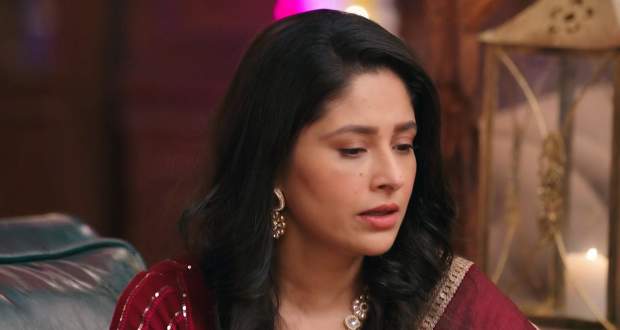 As Ram proceeds to inform Priya that Pihu is there, Priya faints in Ram’s arms leaving everyone shocked.

Pihu comes rushing to Priya and tries to wake her up along with Ram who gets scared after seeing Priya in such a state.

Smacking away Ram’s hands, Pihu asks Ram to stay away from Priya because he is the one responsible for Priya’s condition.

The minister holds onto this opportunity and tells Ram that his daughter is not very fond of him.

Ram straightaway asks the minister to stop his mockery at such a serious time and asks Aditya to call the doctor.

After Sandy suggests that Shubham take Priya into Ram’s room, Ram and others pick up Priya and transfer her to the bed.

The doctor arrives and starts checking on Priya while the minister tells his senior that Ram and Priya were clearly doing an act in front of everybody.

Ram asks the minister why he is being so insensitive towards him while his wife is lying unconscious beside him.

However, the senior minister agrees with the minister that seeing Pihu’s behavior toward Ram, it does not look like they are a family.

All the family members and friends try to persuade the minister by making him believe that Ram and Pihu are just warming up to each other slowly.

Shubham asks the minister to come and check things at Sarah and Vikrant’s wedding for himself and invites them to the function.

Meanwhile, Ishaan explains to Pihu that Ram cares for Priya and is not forcing or threatening her to do anything.

Pihu says she is scared that Priya will leave her again and disappear by herself.

Ram overhears Sarah talking with Krish and understands that he is concerned for Priya and Pihu.

Later, Priya wakes up and spots Pihu coming in to see her.

© Copyright tellybest.com, 2022, 2023. All Rights Reserved. Unauthorized use and/or duplication of any material from tellybest.com without written permission is strictly prohibited.
Cached Saved on: Wednesday 25th of January 2023 07:50:22 PMCached Disp on: Thursday 9th of February 2023 08:13:01 AM