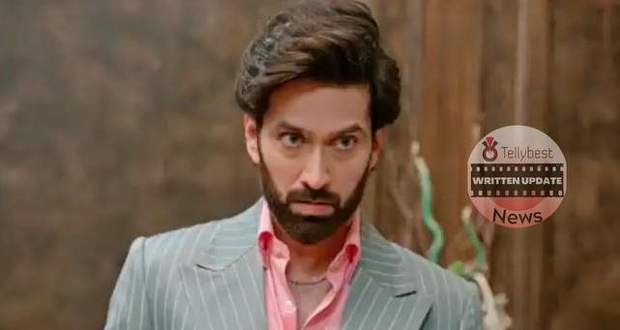 Using her dupatta as a sieve, Priya looks at the moon and then at Ram who feeds her the upma.

Priya then realizes that Ram has kept fast for her too and feeds him lovingly.

Later, Pihu informs Priya that the fast idea was given to her by Vedika.

Aghast that Nandini & Vedika dressed Pihu up before the interview to showcase her as a cheater, Priya swears to teach both of them the lesson.

At Kapoor mansion, Nandini pretends to be sorry for Pihu's interview but Aditya & Sandy take Pihu's side.

Brinda tells Nandini to shut up when she takes Priya's character into the discussion.

Just then, Ram and Priya enter the Kapoor Mansion while Pihu turns away.

Ram hugs her and says she need not run away since she did not do anything wrong.

An angry Ram then asks Shubham to shut his mouth up since the police have come so many times for him so he has no right to talk bad about Pihu.

Priya firmly states that Pihu is no cheater while Sarah, Sandy, & Brinda shower their love on Pihu for keeping a fast for her parents.

All the couples open their fast while Ram & Pihu goofily take each other's selfies.

Just then, Ishaan comes and surprises everyone.

Meanwhile, Nandini tells Vedika she only wants Ram's property but Vedika halts, asking when she is going to get Ram.

However, Priya eavesdrops on their conversation and gives a sieve to Vedika to open her fast, stating Vedika must have kept fast since she also told Pihu to do the same revealing that she knows her truth.

Afterward, Sandy and Priya talk about the chits that were hidden inside Pihu's outfit intentionally in front of Shubham.

Priya announces that Ram is ready to give a donation of 25 lakhs so Pihu's admission can happen.

Shubham confronts Priya, stating she has no shame and is only interested in filling her pocket.

Just then, Ram grabs Shubham's arm and slaps him hard while Nandini gets shocked and Brinda's ears start to ring with the loudness.

Ram screams at Shubham to talk nicely about Pihu and says he is going to find the person who portrayed Pihu as a cheater.

Nandini also asks Shubham to shut up while Ram tells Aditya to keep track of how much money Shubhu spends daily.

Priya glares at Shubham while he leaves like a scared cat.

Ram also leaves the spot while Priya tells Vedika and Nandini to stay away from Pihu because what just happened with Shubham can also happen to them.

The next day, Priya trains Pihu for her interview and Ram also joins them.

Just then, Ishaan comes and Ram asks him to talk to him in private.

Priya gets nervous when Ram asks Eshaan to work in the IT department of Ram's firm.

However, Priya tells Eshaan to work independently and not take Ram's support always, along with Pihu since Ram is going to be the happiest when he sees Ishaan do wonders in his future.

© Copyright tellybest.com, 2022, 2023. All Rights Reserved. Unauthorized use and/or duplication of any material from tellybest.com without written permission is strictly prohibited.
Cached Saved on: Monday 21st of November 2022 09:11:41 AMCached Disp on: Thursday 1st of December 2022 01:30:55 PM