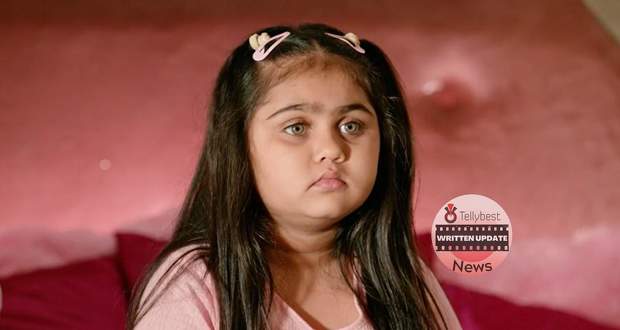 Today's Bade Ache Lagte Hain 2 12th September 2022 episode starts with Pihu telling Ram that she wants to spend the Ganesh festival with both him and Priya.

Ram gets silent for some moment but agrees to Pihu’s request as for him, nothing stands ahead of Pihu’s happiness.

Seeing Ram and Priya leave happily with Pihu, Vedika regrets instigating Ram as her plan backfired drastically on herself.

After returning to the house, Nandini hugs Pihu dearly in her arms and asks her not to leave them again like that.

Ram tells Nandini about Pihu’s wish to let Priya stay with them to which Nandini surprisingly agrees.

Nandini says that what Pihu wants, everything will happen according to that.

Ram takes Pihu to talk with her in his room while Nandini and Priya confront each other in the living room.

In Ram’s room, Pihu apologizes to Ram for leaving the house and making him worry which Ram accepts after he asks Pihu to promise him that she will not do anything like that again.

Pihu promises Ram that she will never upset him but Ram tries to make Pihu understand that he is not aware of all her likes and dislikes.

Requesting Pihu to tell him about her choices, Ram confesses that he wants to do the best for her.

Ram asks Pihu to help him in making the Ganesh idol from clay as she enjoys doing so.

Meanwhile, in the living room, Nandini says that Priya will live in the outhouse as guests are supposed to live there.

Nandini tries to threaten Priya by saying that she will tell Pihu the truth about Priya’s 2 years in jail.

Priya asks Nandini to stop her act as she will not make the same choices as she did 5 years ago because she has learned her lesson.

Accusing Nandini of Ram’s grudge against Priya regarding Pihu, Priya says that this time she will make sure that nothing happens like in the past.

Ram and Pihu come out with their handmade Ganesh idol and place it on the puja pedestal together.

Priya tells Nandini that eventually, everything will be in its place because God wants that to happen.

The next day, Pihu comes to call Ram in his room and spots Ram hugging Vedika.

Vedika sweet talks to Ram and tries to instigate him into filing a legal fight with Priya for Pihu’s custody but Ram refuses it.

Later, at the puja, Priya compliments Ram’s look and says that he is looking very good in his traditional attire.

© Copyright tellybest.com, 2020, 2021. All Rights Reserved. Unauthorized use and/or duplication of any material from tellybest.com without written permission is strictly prohibited.
Cached Saved on: Saturday 1st of October 2022 01:29:49 AM