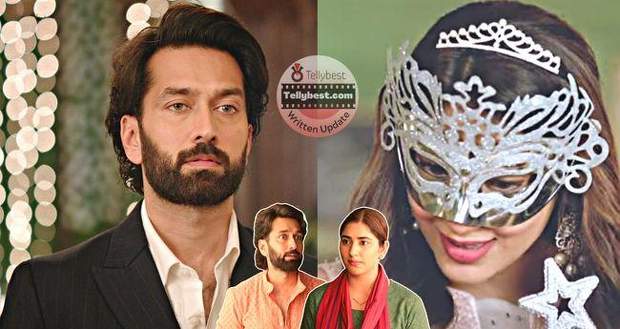 Internally, Ram agrees with Nandini and decides to patch things between Lovely and Krish whom he thinks is her husband.

Meanwhile, Priya goes to see the doctor treating Ram and informs him about Ram mumbling her name.

The doctor happily tells Priya that she can show her real face to him and it won't be a danger to his health now.

Just then, Ram calls Priya and asks him to come to the office to discuss something important and Priya questions the existence whether this is a sign of Ram's improving health.

Meanwhile, Priya in the avatar of Lovely confronts Vedika with Pihu by her side outside Ram's office, bringing a team of two cops with her.

Lovely states that Vedika threatened her daughter and the police give Vedika a strict warning.

Nandini comes there and gets confused to see the police while Priya asks Nandini if she will support Vedika or encourage Pihu's safety.

In front of the police, Nandini pretends to be the best grandmother for Pihu and scolds Vedika for stooping so low.

Later, she tells Vedika not to say anything to Pihu because Priya will get a shock now since Ram is not going to remember her.

Inside Ram's cabin, Lovely (Priya) starts the conversation by asking him not to make fun of her looks. Ram looks guilty and apologizes to her and Lovely says she needs his help to change her appearance.

Meanwhile, Ram brings up the topic of Lovely's husband and states he wants her to patch things up with Krish since he is her husband.

Lovely asks Ram how he knew Krish is her husband and Ram replies that Nandini told him about Krish.

Later, at Sood House, when Priya reveals that she didn't deny that Krish is her husband, Sarah scolds Priya for affirming Nandini's game plan.

However, Priya grows frustrated and tells Sarah she has to make Ram recover his memories as she is running out of time.

Sarah looks at Meera who looks as if she is hiding something and Meera asks Priya to tell Sarah that she is pregnant.

At Kapoor Mansion, Vedika worriedly says that she has stolen one copy of the video where she is seen threatening Pihu but what if the police founds another one?

Nandini, on the other hand, informs Vedika that Priya accepted that Krish is her husband and it seems as if she is planning something big.

At Sood House, Priya tells Sarah that she asked Meera Ma not to tell anyone because if Nandini gets to know about her pregnancy, she will surely try to attack the unborn baby inside her stomach as well since it is so easy for them to threaten Pihu.

She chuckles and reveals that Ram is jealous of Krish while Sarah also affirms this fact as Ram questions Vikrant to find out details about Krish.

Later, Ram takes Lovely to a temple and wishes that she finds her love (Pihu's father) again and promises to do a perfect makeover for her.

Priya gets butterflies as Ram is talking to her like he used to and she closes her eyes to ask God to be with her and protect her husband and her kids.

© Copyright tellybest.com, 2022, 2023. All Rights Reserved. Unauthorized use and/or duplication of any material from tellybest.com without written permission is strictly prohibited.
Cached Saved on: Wednesday 25th of January 2023 12:08:51 PMCached Disp on: Tuesday 31st of January 2023 08:08:03 PM