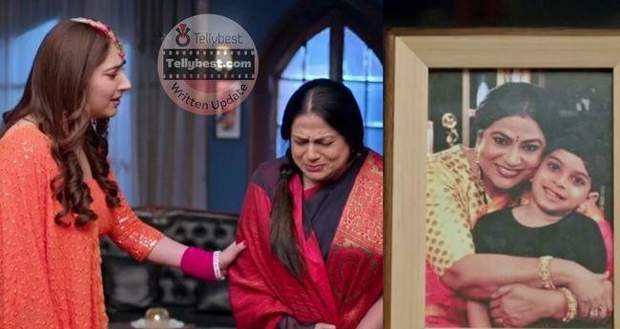 Lakhan makes it crystal clear that unless and until Priya reveals the truth about her business with Swati, he won't tell her where she is.

Back at Kapoor's mansion,  Meera is helping Ram to put on his wedding 'safa'  and wishes Ram and Priya a lifetime of happiness without any obstacles or fights at which Ram gives a chuckle and murmurs that a fight in inevitable since he has named all his wealth after Priya and that is ought to make her mad at him.

Ram offers Meera to perform their Ghatbandhan, However, Nandini arrives and says that Ram can hate her all he wants but at least should not take her right to do his Gatbandhan.

Ram still insists Meera on performing their Gatbandhan which makes Nandini turn to Meera and apologize for her behavior. She begs Meera to let her perform the Gatbandhan.

Meanwhile, Priya asks Lakhan to drop his obnoxious attitude as she really needs to talk to Swati, Lakhan blames Priya for instigating Swati against him.

Priya asks Lakhan to go to Swati and tell her that Ram is suffering from asthma and because of the smoke in the house, emitted during the rituals, Ram can get very ill.

Priya tells Lakhan that only Swati knows to make a tonic that can control an asthma attack.

Lakhan feels that Priya is trying to manipulate him but the benefit of the doubt brings out the better of him.

Back at the Kapoor mansion, Ram goes in search of Priya as he wants to talk to her about Nandini.

Sara and Brinda stop Ram from entering Priya's room as it is considered bad luck, to meet the bride before the wedding.

Priya finally arrives at the Kapoor mansion and gets dressed for her wedding.

She walks down the stairs along with Sara while Ram looks at her mesmerized after that Ram and Priya put on the flower necklace on each other.

Ram whispers into Priya's ear that Nandini wants to do his Gatbandhan but he doesn't know what to do.

Priya wishes to herself that Swati arrives just in time so that she can perform the Gatbandhan as she is Ram's rightful other.

Ram asks for his surprise gift from Priya, however, Sara and Brinda start blaming Aditya for the mishap that happened with his gift.

Back at the bus stop, Swati's heart is heavy as Lakhan hasn't arrived yet.

Lakhan says that he can live without Avni but he is not so cruel that he will let Ram die because of his grudges toward him.

Lakhan tells Swati that Priya has told him that Ram can get very ill because of the wedding bonfire.

Swati says that Ram has asthma and he needs her tonic.

Lakhan asks Swati how did she know that Ram has asthma. Lakhan keeps forcing Swati to tell him the truth which eventually breaks her up.

She confesses that she is Ram's mother and then breaks into a puddle of tears.

© Copyright tellybest.com, 2022, 2023. All Rights Reserved. Unauthorized use and/or duplication of any material from tellybest.com without written permission is strictly prohibited.
Cached Saved on: Wednesday 25th of January 2023 10:57:10 AMCached Disp on: Sunday 5th of February 2023 04:16:10 AM