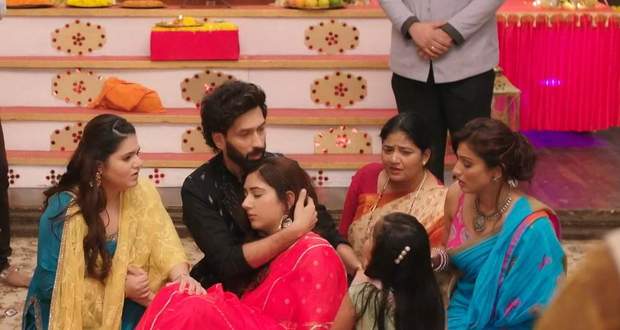 Today's Bade Ache Lagte Hain 2 13th July 2022 episode starts with Pihu running inside the room to see Priya who gained her consciousness back.

Priya calms down Pihu who complains about Ram for being responsible for Priya’s illness.

Ram comes there at the same time when Pihu mentions that she doesn’t want Priya to leave her like she left when Pihu was little.

Priya promises Pihu that she won’t leave her daughter ever again.

Meanwhile, Pihu keeps questioning Priya about being at Ram’s place and Priya narrates the story of being on a family adventure for which Pihu’s help is required.

However, Pihu denies helping Ram saying he is a bad man and she doesn’t like him despite Priya’s insistence.

Priya asks Pihu how she reached the residence when Pihu questions her if Ram resembles her prince charming.

Further, Ram let his presence known when Pihu is unable to tell Priya about Maitri’s condition.

Pihu shouts at Ram for eavesdropping at their conversation and the two gets into a banter.

Pihu insits on leaving while Ram insists on staying and the two starts pulling Priya by her arms in their direction.

Ram makes Pihu give in and let Priya and Pihu stay in his room for which both girls thank him.

Meanwhile, Pihu agrees to help Ram for 7 days and says that she is tolerating him for Priya only.

On the other hand, Nandini and Vedika discuss the ongoing situation of how Priya and her family are behind the money and Ishaan has the same motive to unite Ram and Priya.

Meanwhile, Aditya and Vikrant listen to Ram blabbering about how Pihu doesn’t like him at all and argues with him which has made the minister doubt Ram’s character.

Aditya advises Ram to keep Priya happy in order to keep Pihu on his side for which he receives a glare. Thereafter, Vikrant suggests Ram to pamper Pihu with gifts and toys.

The next morning, Nandini calls Sarah and Vikrant to the Kapoor mansion to propose the idea of organizing the wedding at the mansion only.

Sarah gives her verdict in affirmation.

© Copyright tellybest.com, 2020, 2021. All Rights Reserved. Unauthorized use and/or duplication of any material from tellybest.com without written permission is strictly prohibited.
Cached Saved on: Sunday 2nd of October 2022 06:07:07 AMCached Disp on: Thursday 6th of October 2022 04:16:01 PM