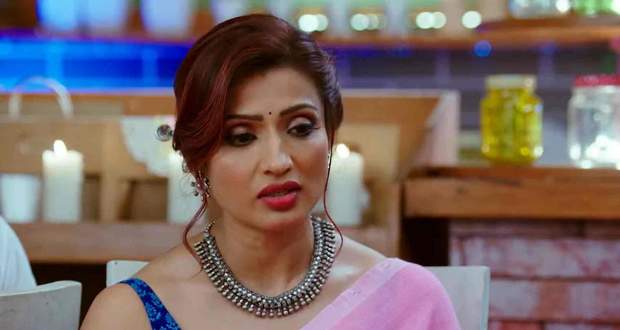 Priya says that she is unaware of how the earrings got into her bag and asks the guard to check the CCTV footage to verify things.

Ram gets shocked to see Sweta dropping the earrings in Priya’s bag and leaves without saying another word.

Meanwhile, Pihu stares at her favorite cupcake but refuses to buy anything from Maitri on seeing the cost.

Maitri leaves Pihu alone for a while to go to the washroom while Pihu spots Ram talking on the phone.

Ram talks about Sweta with Aditya and tells him the news of him seeing Priya after so many years.

Both Ram and Pihu order the same cupcake at the same time when only the last piece is available.

Ram refuses to give up the cupcake to Pihu and finally buys it by giving the shopkeeper his credit card.

However, Pihu finds a plan to get the cupcake back and tells Ram that she will help him in chasing away Sweta if he gives her the cupcake.

Ram agrees and gets shocked when Pihu calls him her father in front of Sweta.

On hearing Pihu call her mother, Sweta freaks out and ogles out of there after bidding bye to Ram.

Ram and Pihu share a high five but Ram breaks his promise and leaves without giving Pihu the cupcake.

Maitri spots Pihu with Ram and panics by herself.

To teach Ram a lesson, Pihu acts like she is having an attack of asthma making Maitri freak out and call Priya immediately.

Ram comes to Pihu hurriedly and gives her water and the cupcake to eat so that she can calm down.

After Ram leaves, Priya and Sarah come there and discover that Pihu was acting the whole time to get the cupcake.

Later, Ram and Aditya discuss having a video call with Ishaan.

Aditya tries to stop Ram from using a son against his mother but Ram does not care a bit.

© Copyright tellybest.com, 2020, 2021. All Rights Reserved. Unauthorized use and/or duplication of any material from tellybest.com without written permission is strictly prohibited.
Cached Saved on: Sunday 2nd of October 2022 07:43:44 AMCached Disp on: Wednesday 5th of October 2022 06:16:20 PM